The New Liturgical Movement has this piece about the presentation to the Pope of a new tiara:

Just a quick note as some of our readers may be interested in this story published by John Sonnen about a papal tiara that was gifted to Pope Benedict XVI , commissioned by Dieter Philippi and crafted by a Bulgarian Orthodox liturgical firm.

The tiara was presented to the pontiff today by Dieter Philippi and a small delegation of Catholics and Eastern Orthodox. 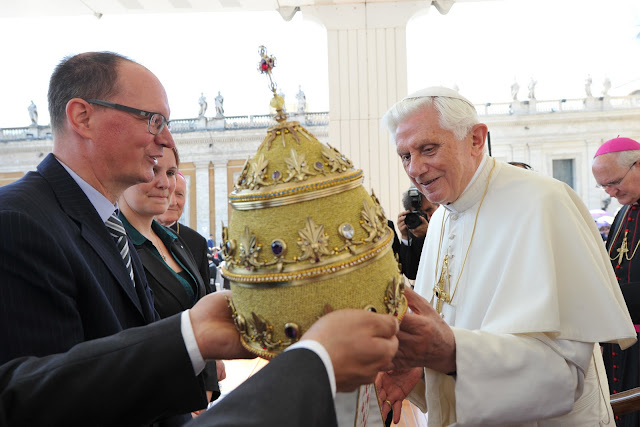 Posted Wednesday, May 25, 2011 Comments (33)
Fr Blake has also commented about it here.
Both posts have attracted anumber of comments - including one from myself.
I cannot understand why anyone would not want the Pope to be crowned with the tiara and wear it on appropriate occasions.

The origins of the tiara are complex, and may once have represented temporal authority under the Byzantine Emperor. By the time it became the tiara we recognise it had been spiritualised as a symbol of the Papal monarchy governing the Church. As in medieval representions God the Father is often represented wearing the tiara, it is a reminder that the Papal power is delegated from God, and, as with the decree on Papal Infallibility, refers to that power inherent in the Church itself. The Pope wears the tiara on behalf of the whole Church, and exercises authority on behalf of the whole Church over the Church, as God's vicar. Coronation points out the limitations and responsibilities of the monarchical office, spiritual or secular - it was absolutist monarchies that tended to dispense with or downgrade coronations. Pope Paul VI may have set aside his tiara, but in respect of the liturgy at least he acted in an absolutist manner.
I think this is a very handsome gift, and we must hope the Pope, or, at some distant date in the future, his successor, takes the hint. Whether they will is, of course, an unknowable matterat the moment.

This story reminds me of a plan I had a while ago, which was to publish some posts about the history of the tiara and the examples which exist in the Vatican and elsewhere. Once I can find some more time I will do so.

My two thoughts when I saw this picture were:

1. Speaking as a schoolmaster, I would beware the grins on those faces. I've seen those expressions on the faces of naughty schoolboys. Those presenting the tiara are saying, "Go on, I dare you." That on the face of His Holiness is saying, "I'd rather like to; can I get away with it?"

2. It's interesting that this tiara was presented by a mixed Catholic and Orthodox group. This seems to be a very strong message from the Orthodox involved. "We may well be ready to accept your primacy, and heal the Great schism. But you've got to behave like a pope. That means defending the faith. And it means preserving and respecting your own Western traditions because, if you can't defend your own, we can't trust you with ours."