As I wrote in my post The Royal Wedding I intend to publish online some thoughts and reflections about this splendid event. I will divide them up by theme, rather than put all my ideas in one single piece. 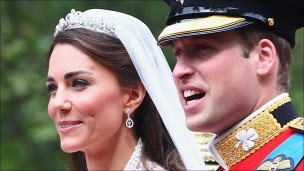 Inevitably the way the media covered the wedding attracted attention. The press were obviously extensive in their coverage. Even where one might have found a somewhat grudging attitude or studied disinterest this was not the case. Thus not only The Guardian, but even The Independent covered it as a news story with pictures: poor old Andreas Whittam-Smith must be turning in his metaphorical grave as First Church Estates Commissioner. The Guardian news coverage was mainstream, not driven by an editorial line other than reporting the news, and indeed from what I have read seems very positive.

Now on these occasions I do not read feature articles in The Guardian for the sake of my blood pressure and mental equilibrium - and The Independent is permanently beyond the Pale for me. However a friend did draw my attention to this article by Jonathan Freedland in The Guardian, which might suggest that some at least in that world are learning some sense in these matters; it makes good points and is worth looking at.

A piece from a not totally different standpoint with which I also was rather taken is a commentary by Ian Dunt on Yahoo - his last line is forceful.

The excellent Australian Radical Royalist has a piece about the coverage in Australian press The [republican] Age gives in! Front page of The ..., which suggests that there as here the republican-minded press realised that even its readers were likely to be interested in the facts of the wedding. Again The Guardian reported that Royal wedding boosts Australian monarchists .

As someone commented to me he disliked the fact that the British republican minded minority gets undue coverage. This may not be metropolitan chattering-class bias so much as a modern obsession with fairness and equal access to the media. The principle of the party political broadcaste being distributed on the basis of support tends not to be applied. I wonder if the media here take as seriously the much larger monarchist groups in some continental countries such as Portugal. Maybe, after all, it is the chattering classes to blame...

I can appreciate that journalists often have on these occasions to fill up the column inches with relatively little information upon which to proceed, or do not have the historical background to really interpret the stories. A piece I did read, a profile of Prince William, in the Sunday Times Magazine the weekend before the wedding illustrates something of this. The writer was using relatively little in the way of hard facts and yet does create a sympathetic and convincing portait of a man who emerges as both serious and dedicated as well as likeably uncomplicated. The article starts here, but readers then need to subscribe to the Sunday Times online service to read it all.

I watched the wedding on BBC. I rather missed out on the instant punditry from Simon Schama et al - and that may have been no great loss. I did slightly wonder who had got David Starkey under contact. However as both are early modernists the long duree of the medievalist would perhaps be lacking...

The BBC coverage was much better than some of that a few years ago when it had fallen into a rather sickly fashion concious style. This was very clear in the coverage of the wedding of the
Earl and Countess of Wessex. I remember a friend saying of then that as a firm monarchist the effect on him of the gushing commentary was to be temporarily irritated into a sceptical mood. This time the coverage, and commentary, measured up to the significance of the day.
Posted by Once I Was A Clever Boy at 11:32