The lecture at last Tuesday evening's meeting of the Oxford University Heraldry Society was given by John Titterton FSA and was about the heraldic glass and the building of the chancel at Norbury church in south west Derbyshire. In recent years the glass has been cleaned and conserved at a cost of £250,000.

St Mary and St Barlok Norbury is one of those medieval churches I have long wanted to visit but not manages to do so far. There are online articles about the church here and here, and two more about St Barlok's cross, an Anglo-Saxon piece preserved in the church and the relatively little known saint himself here and here.

As it stands today the church has an early decorated chancel and a perpendicualr nave with its distinctive tower porch, and adjacent to it the medieval manor house of the Fitzherbert family. The two stand . along with the jacobean manor house, by themselves at the centre of a dispersed settlement. 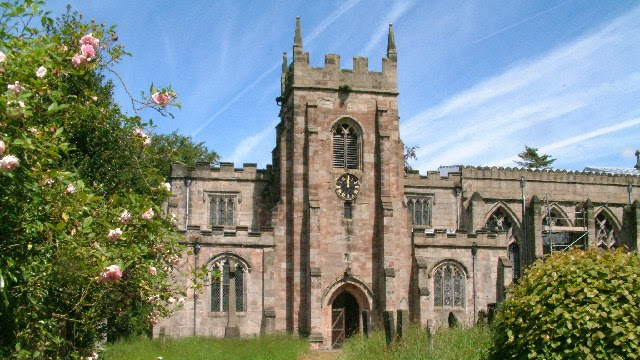 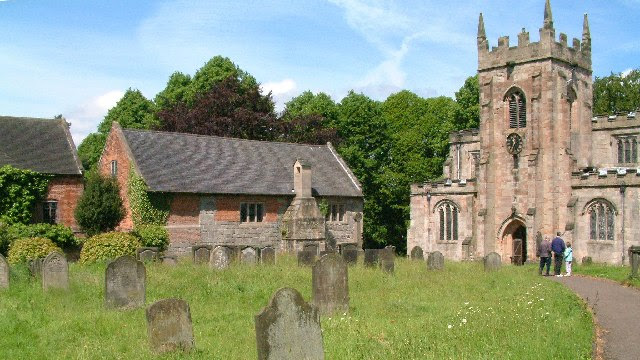 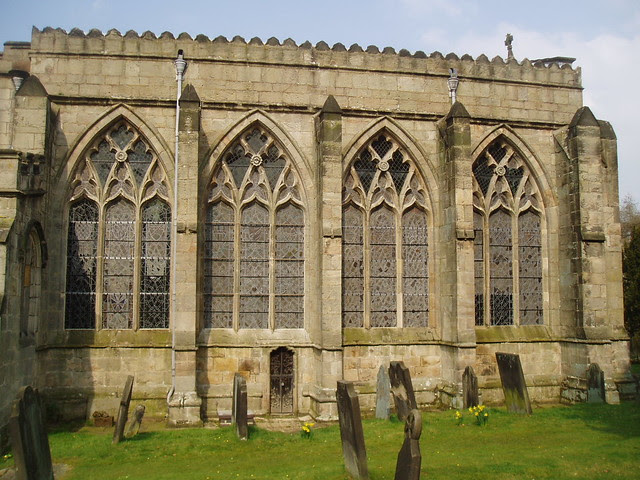 The chancel of St Mary & St Barlok at Norbury, Derbyshire.

Basing his explanation not only on the glass but also the architectural evidence and record evidence he attributed the construction of the chancel to Sir Henry Fitzherbert, who died c. 1315, and to whom one of the tombs in the church is ascribed.

The 'box-like' structure and design of the chancel bears striking resemblances to those of Chartham church in Kent, Checkley church in Staffordshire and to the choir of Merton College Chapel in Oxford, all of which are attributed to the 1290s, as well as the episcopal chapels of St Etheldreda in Holborn (1290) and that at Wells (1292). The presence of ogee arches in the tracery would seem to place it after they frst appear in England on the Queen Eleanor crosses of c.1295.

The design of the window tracery bears strong resemblences in its use of a boss within the tracery to the windows at Chartham, Checkley and Merton.

The original scheme of glazing survives in the north and south set of windows, although the tracery lights have lost their original glass. The east window contains later glass of about a century later. Each light of the windows has grisaille glass according to four different patterns, with an heraldic shield at the top. Some of the lights appear to have been transposed over the centuries, but the scheme is essentially complete. Details of the glass are virtually indistinguishable from other work at Chartham and Merton, both in the grisaille leaf patterns and inserted coloured motifs and in the heraldry, especially the arms of the Clare family.
The arms would suggest a date between 1298-9 (the betrothal and marriage of King Edward I to Margaret of France) and 1305-6 (the arms of Robert the Bruce are included - unlikely to have been done after he had himself crowned as King of Scots in the latter year).
Surviving records refer to building work at Sir Henry's "court" and plans to divert the road from outside it in 1292, 1300 and 1304, which also suggests a majorprogramme of building.
Sir Henry was not an especially prominent man - not in royal service, or important in county matters, yet was employing a team who worked for episcopal or corporate patrons (the Bishops of Ely and Wells, Canterbury cathedral priory, Merton college) and had commissioned a piece of high quality and in the latest style. The glass records contacts with the great and the good of the era, and the suggestion was made that he was remembering comrades in arms and administration from military campaigns.

John Titterton has produced a handsome booklet on the windows in aid of the continuing restoration of the fabric.

This was a remarkable insight into the world of artistic patronage and social networks at the turn of the thirteenth and fourteenth centuries, and I am all the more keen to go and see Norbury church for myself.