No, this is not about me.

Eccenticity is the name of the new exhibition at the Museum of the History of Science in Broad Street in Oxford. It is based on eccentric objects in their stored collection - especially those things which lie outside their normal collecting range - and around eccentric scientists, especially in Oxford.

The following is adapted from their website about the exhibition: 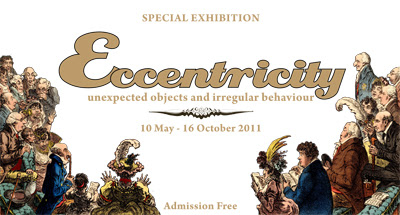 Science and Oxford are two traditional sources of eccentricity. Eccentric scientists are familiar creations of the media and eccentric Oxford academics inhabit both literary fiction and historical fact. 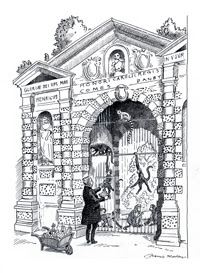 Eccentric Oxford scientist Charles Daubeny kept monkeys in a cage in the gate of the Botanic Garden - until someone released the monkeys as a prank.

Over the years the Museum has taken a broad approach to collecting, and contains many unexpected objects, often hidden away in the store. This special exhibition shows some of the most intriguing of these, telling their stories, and the stories of their eccentric owners. Who would have thought that a museum of science would have a large collection of typewriters, a Japanese mechanical fly-trap, a 19th-century clockwork bird-scarer or an astrolabe belonging to Nostradamus?

Having looked around the exhibition I would recommend it to anyone in Oxford this summer.

Amongst the objects on show which I would comment on are prototypes of the computer, including parts of Charles Babbage's calculating engine, and the aforementioned astrolabe and equitorium which it is believed may well have been owned by Nostradamus. Now with that and the Holy Table of his English equivalent Dr John Dee on permanent display in the Museum what more could you want to foresee...?
Eccentricity continues until October 16th. The Museum is open Tuesday-Friday 12-5, Saturday 10-5 and Sunday 2-5. Admission is free.

Labels: Museum of the History of Science, Nostradamus