The Queen in Ireland 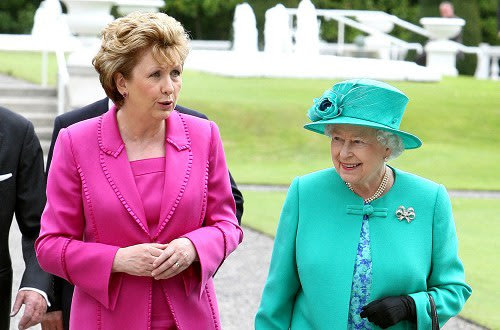 Today The Queen is beginning her state visit to Ireland. By common consent this is one of the most important visits she has paid during her reign. Indeed it may be the most important, and will probably rank alongside that of King Edward VII to France in 1903, of King George VI to the US in 1939 and of the Queen herself to West Germany in 1965 in terms of national rapprochment. The presence of the Prime Minister as minister in attendance emphasies its importance to relations at the highest levels of constitutional and political relations.

When the possibility of such a visit as this was raised in the past I was always sceptical as to it happening - there are so many ambiguities in relations between the two countries, which have not gone away, and indeed recent accords between them have, arguably, compounded them. However it is now taking place, and it must be hoped that it can help in the process of genuine peacemaking and reconciliation between different traditions. The concerns for the safety of the royal visitors and the public opposition of some elements in Irish life show how sensitive a task The Queen is addressing.

As with the Royal wedding I will post further reflections over the next few days about the Crown and Ireland.