At teatime I went to a most interesting and enjoyable lectutre by Fr Michael Lasky OFM Conv., who is currently based in New York, on Franciscan Spirituality and Art in the basilica at Assisi. The talk was given to the Oxford Centre for Franciscan Studies, who offer a consistently interesting and stimulating series of lectures.

Fr Lasky has worked as a tour guide in the basilica in the past and spoke with knowledge, enthusiasm and understanding about the church and its great cycles of paintings by the Master of St Francis, Cimabue, Giotto and other artists. His aim was to show the way in which the paintings expounded in visual form Franciscan thought and spirituality, an aim in which, despite the limitations of time, he succeeded.

The basilica with the entrance to the lower church

The basilica is used by the Franciscans, but owned by the Pope ( and hence the recent intervention in its administration by the present Holy Father). The foundation stone was laid by Pope Gregory IX in 1228, and the building consecrated by Pope Innocent IV in 1253. The cycles of paintings extend in date into the fourteenth century and beyond. The link above gives details. 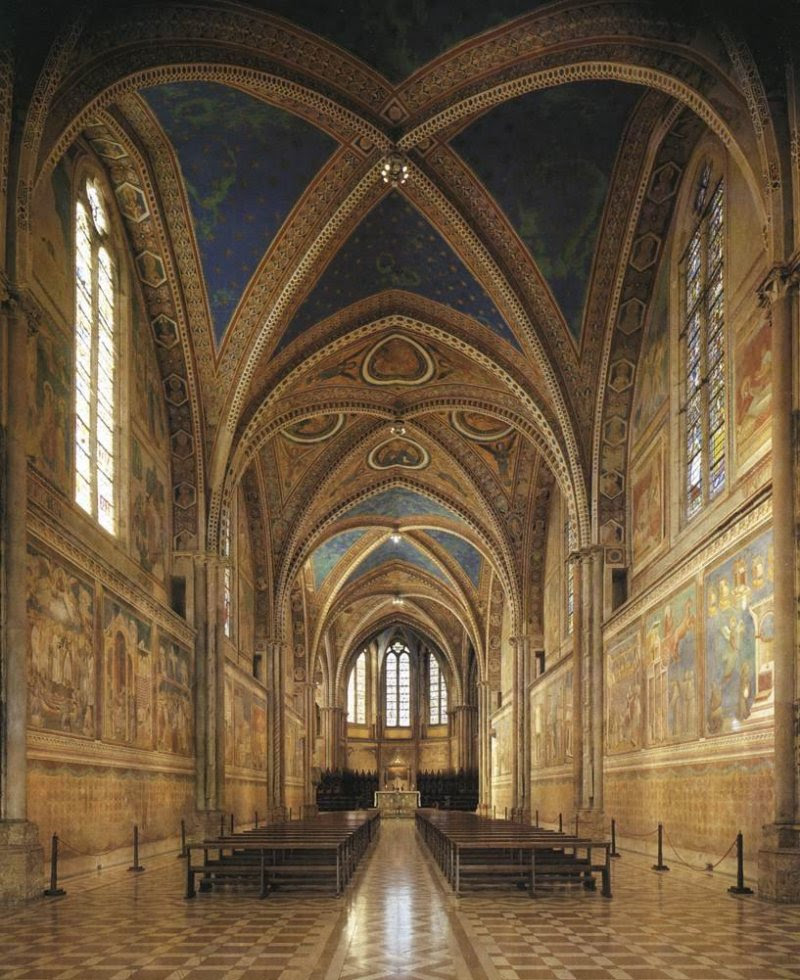 The upper church of the basilica

Amongst the examples he spoke about were the paintings in the lower church from 1260-65 by the Master of St Francis. Following Thomas of Celano's Vita secunda of St Francis they pair the lives of Christ and and of Francis with complex and rich symbolism. Thus when Francis strips off the clothes his natural father had given him he is freed to say the Pater noster to his heavenly father as never before - now he truly is God's child. This parallels the image of Christ being stripped at the Crucifixion. This typology is pursued through the church. The scenes showing Christ at Emmaus and the post mortem validation of St Francis' stigmata are significantly placed within the grill which encloses the sanctuary - both events take palce when the subject has passed through death to eternal life.

Fr Michael siad he wanted to rescue St Francis from the bird bath, and his exposition of the famous image of St Francis preaching to the birds did that - what it is is an image of preaching the news of salvation to all the nations and to the created order. 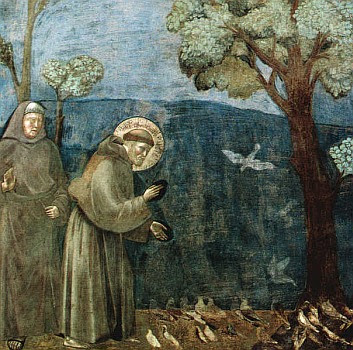 St Francis preaching to the birds.

The account of the preaching to the birds from The Little Flowers of St Francis is here, and there is an exposition of it here.

In the paintings from 1305-11 of the lower church vault, attributed to Giotto the symbolic pairing occurs again - this time Francis is presented as the new St Martin.

The possibility that the upper church may have been designed, or used, as a chapter room initially, with consequent changes in its decorative scheme was raised, as were such points as the way in which in the scene at San Damiano the crucifix leans forward so as to speak to the figure of Francis.

It is now doubted if St Francis actually was ordained as a Deacon, and the scenes in whivh he is shown vested as such - the first Christmas crib, and his depiction on the lower cchurch vault in majesty - was in Fr Michale's opinion a decision to clericalise his image to avoid the problem of the perception of lay movements which were not under the control of the contemporary Church. The activities of groups such as the Spirituals and the Fratticelli posed very real problems to the Franciscan mainstream.

The lecture pointed out something of the richness of image and typology in the period. Fr Lasky conclued with the point that he had had students who queried the fact of the subtleties of medieval thought yet never queried the intricacies of the micro-chip.

This was a splendidly illustrated talk, which made one yearn to go and see Assisi for oneself - and that no doubt was part of the speaker's intention.