Following on from my post referring to Lewes Priory in my piece about St Pancras Stephanie Mann of Supremacy and Survival has posted about the Priory, with links to the website of Lewes Priory Trust: 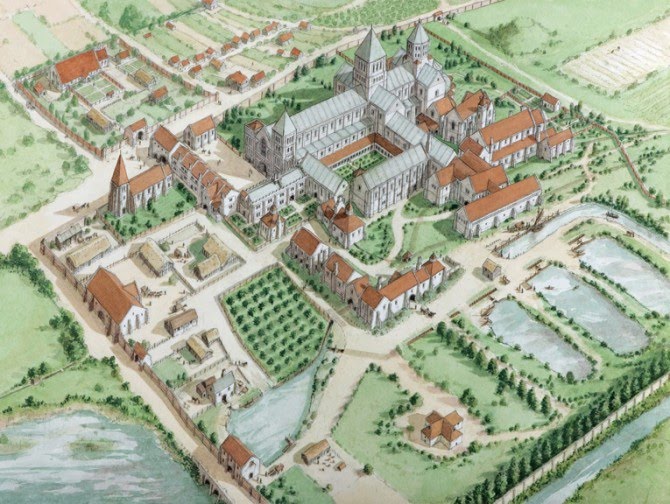 The post on St. Pancras led me to this site for the Lewes Priory Trust, which includes the illustration above (Illustration © Andy Gammon 2010) which depicts what it might have looked like. According to the site:

Lewes Priory was founded by William de Warenne and his wife Gundrada between 1078 and 1082 on the site of a Saxon church dedicated, like the Priory, to St Pancras. William was a leading Norman baron with extensive lands in Sussex and elsewhere in England. He also founded Castle Acre Priory in Norfolk. Lewes was the first Priory in England belonging to the reformed Benedictine Order of Cluny, based in France. It became one of the wealthiest monasteries in England. However, in spite of its wealth it played little role in national affairs, except at the time of the Battle of Lewes in 1264 when it was occupied by the troops of King Henry III.

The main buildings, including the great Priory church, were put up in Quarr limestone in the Romanesque style between c1082 to c1100 and in Caen limestone from c.1145 to the 13th century. Repairs and additions continued up to the monastery's dissolution in November 1537. At this time it owned over 20,000 acres in Sussex with other lands elsewhere, was the patron of 19 parish churches in the county and owned two houses for the poor in Lewes. A number of daughter priories were dependent on Lewes. There were only 24 monks at the time of its dissolution, compared with as many as 100 in the 12th and 13th centuries.

The site also includes links and information about Cluny and the religious houses that were dependent upon Lewes in England.

To Stephanie's post I would add I have always been fascinated by reconstructon drawings that evoke what was once in existence, and this is the first I have seen of the great church and priory at Lewes.
In the light of what the post says about there already being a church dedicated to St Pancras which was taken over to establish the priory might suggest I was going beyond the historical evidence in suggesting that William and Gundrada were referring to Harold Godwinson's oathbreaking in their foundation, but the possibility is intruiging. St Pancras may well have seemed a very suitable patron, and here was a church dedicated to him ready to be expanded into amonastic house

My interest in Lewes Priory comes from three things - as a Cluniac foundation it was of the same family as the priory in my home town of Pontefract, the Warrenne family held the neighbouring lordship of Wakefield (where I was born) from the Conquest until the mid-fourteenth century, and some of my ancestors lived near Lewes - although whether they were there when the priory was in existence I do not know.

I'm a great fan of your blog. I wonder if you have read 'The King's Achievement' by RH Benson, which has a monk of Lewes as one of the central characters.

Thank you for this, and for being afan. I have not read 'The King's Achievement', but will keep an eye out for it.

Thank you for the link, John--and I second Convenor's suggestion about Benson's "The King's Achievement", which contains the drama of one brother Chris being a monk at Lewes while his older brother Ralph is one of Cromwell's Vistors there.