The Use (or Misuse) of Rheims


Last Monday the excellent Rorate Caeli blog had this post about the octocentenary of the consecration of Rheims cathedral
(being traditionally English I am inclined to spell the place name with an h): 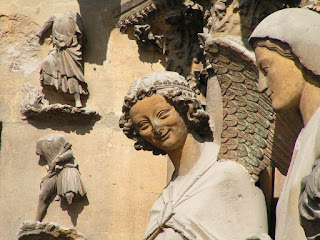 News of the celebration of the 800th anniversary of the dedication of the Cathedral of Reims, which took place last Friday:

According to the cultural assistant of the Mayor of Reims, Jacques Cohen, "we had to discuss with the archbishop [Abp. Thierry Jordan] so that the Our Father would not be sung or recited" during the ceremony for the eighth centennial of Reims Cathedral. "We [the staff of Socialist mayor Adeline Hazan] are secular [laïques]." They finally won their struggle. And if the Ave-Maria was tolerated, it was because the Cathedral is called Notre-Dame... "We had to negotiate, that took place directly between city hall and the archbishop. It was not simple," confirmed, outside the ceremony, auxiliary Bishop Joseph Boishu.

I am inclined to say what do you expect, or indeed what should we expect here were we to go down the same path in such matters as the French.
It is all the result of those dreadul events in France in 1789, and even when thing were more or less put right in 1815, they still wrecked tham again in 1830, and have consistently compounded the situation ever since with revolutions, republics, disestablishment, pseudo-philosophies that embrace everythig and amount to nothing, aggressive secularism and such like. Thus we see what has happened to the eldest daughter of the Church in the place where Clovis was baptised in 496.