Today being St Cecilia's day reminds me that Cardinal Wolsey's titular church in Rome was that of Sta Cecilia in Trastevere.

Here in Oxford in his foundation which eventually became Christ Church is what is said to be his Cardinal's hat or galero, which he received in 1515 from Pope Leo X. The hat was carried in solemn procession through London on November 15th that year and on November 18th Wolsey received it from the hands of the Archbishops of Canterbury, Armagh and Dublin at the conclusion of Mass in Westminster abbey. The scene is depicted in a rather florid nineteenth century painting reproduced on the cover of Schofield and Skinner' s excellent The English Cardinals (2007) : 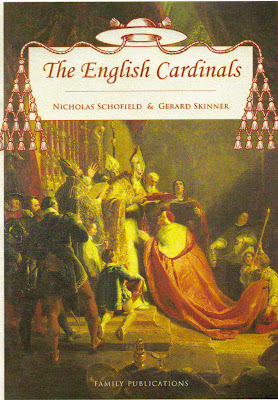 Image:romanmiscellany.blogspot
The hat now at Christ Church was found in the Great Wardrobe in London by Bishop Burnet in 1710 and eventually passed into the hands of Horace Walpole. From his collection it passed to taht of Charles Kean and in 1898 it was given to Christ Church and is kept in a specially made case in the Library - which is not open to visitors. Expert opinion considers the rabbit fur fabric and silk as well as the design to be of the early sixteenth century. The hat is missing its cords and tassels, but the holes for them can clearly be seen.

If it is actually Wolsey's hat one wonders whose hands it passed through after his arrest and death in November 1530 - did it at one point rest over his grave in Leicester abbey before it was dissolved, or was it left at Cawood when he was arrested? The Frith logo will not appear on your prints (except for genealogy prints).

The logo in this photo is for online copy-protection only.
Also note, this is a content sample only. It does not represent the guaranteed superb quality of Frith photo prints.

This photo has not yet been digitally restored by Frith archivists. It will be restored before any prints are made from the photo.

Image:Francis Frith Ref: 64075
The college does not make much of this link with its founder, and this photograph from 1912 was the only one I could find online.

However the hat was lent on display to New Haven in 2010 to the Paul Mellon Center for British Art at Yale's exhibition on Horace Walpole at Strawberry Hill. There is an article, complete with illustrations of the hat, by the Curator of the Christ Church Picture Gallery in Christ Church Matters 2010 about transporting the hat to the USA and entitled The travels of a hat.
Posted by Once I Was A Clever Boy at 13:36