Tombs did not fare too well with the iconoclasts of sixteenth and seventeenth century England. Some tombs and the remains they enclosed were moved to new sites - so King Henry VIII (or perhaps his brother-in-law Charles Brandon) moved his sister Mary, sometime Queen of France and then Duchess of Suffolk from Bury St Edmunds abbey into the nearby parish church of St Mary, and his grandfather Edmund Tudor, Earl of Richmond, was moved from the Greyfriars in Carmarthen to St David's Cathedral. Nothing however was done for Edmund's father Owen, buried in the Hereford Greyfriars, let alone King Henry I at Reading or King Stephen at Faversham or King Richard of the Romans, brother of King Henry III, at Hailes, or his widow at Oxford Greyfriars. As we know, and this is perhaps less surprising, King Richard III, was left to wait a twenty-first century re-discovery and re- burial in Leicester. At Fotheringhay Queen Elizabeth I did order the construction of new monuments to the Dukes of York in what remained of the collegiate church - but in so doing largely obliterated
the original memorial brass of the second Duke who had died in 1415 at Agincourt.

It was indeed the risk of the destruction of tombs and family arms which the Queen cited in her proclamation against iconoclasm early in her reign, and that may have saved some things from the enthusiasm of reform minded clergy, churchwardens and busybodies.


Quite apart from casual damage there was clearly the deliberate destruction of saints images on tombs and the loss of liturgical accouterments such as hearses.


In the parish church of St Nicholas at West Tanfield in Yorkshire is the alabaster tomb commemorating Sir John Marmion who died in 1387, and his widow Lady Elizabeth Marmion ( nee St Quintin) , who died in 1400. It still has the wrought-iron hearse has prickets for candles which it was customary to light at anniversary Masses when the iron hearse would be covered with a pall. It is believed to be the only one of its kind to survive in England. At Warwick there is a different type of pall support included in the bronze work around the effigy of the Earl of Warwick.

The Marmion tomb at West Tanfield


In the really impressive church at Tickhill in the southern West Riding is the tomb of Sir Thomas and Lady Fitzwilliam, which was made circa 1525. This was moved from the Austin Friary in the town at its dissolution. Lady Fitzwilliam was the daughter of Marquess Montagu, and thus niece to Warwick the Kingmaker, and cousin to his daughters Isabella Duchess of Clarence and Anne, succesively Princess of Wales to Edward of Westminster and Queen to King Richard III, as well as being kin to the Yorkists and thence the Tudors.

The Fitzwilliam Tomb at Tickhill

This, however, is not just an example of a tomb that was moved, but a rare survival, indicating what might have been the style of English Catholic Renaissance monuments. Apart from the tombs of King Henry VII and his Queen, and of Lady Margaret Beaufort in Westminster Abbey this is probably the earliest to survive, or have been commissioned, and that 150 miles or so north of the metropolis.


A second example in this style is in Sussex at Battle, and commemorates a courtier of King Henry VIII. : 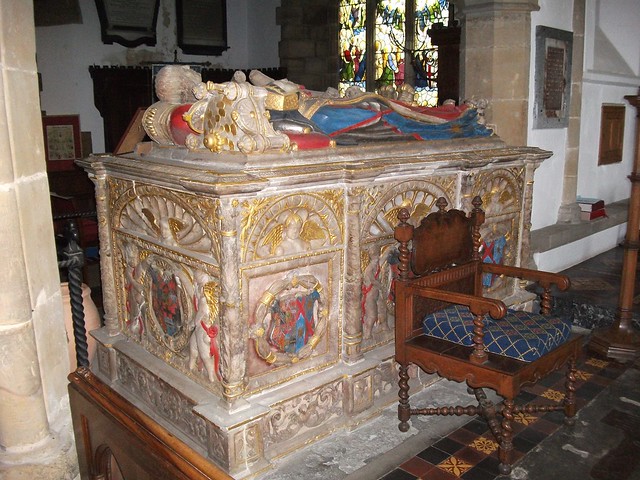 
Most impressive of all are the Howard tombs at Framlingham in Suffolk. To the church the third Duke of Norfolk brought his father's remains and tomb from Thetford Priory and buried thee his son-in-law, Henry FitzRoy, Duke of Richmond, as well as commissioning a grand tomb for himself and his two wives, the design of which was copied by his grandson the fourth Duke for his second and third wives, and planned to be buried there himself; fate and the headsman's axe left him in St Peter ad Vincula in the Tower of London. The tomb of the third Duke of Norfolk (d.1554) and his two wives
Framlingham church in Suffolk

These two Ducal tombs are extraordinary, with their figures of saints in Classical niches, surrounding the tomb chest, a suggestion of what the Marian restoration might have produced in England. Whatever the third Duke may have done in support of the King' spolicy in the years after 1529, by the time of his death his conservative religious tendencies were clearly indicated, and the fourth Duke did not repudiate them with his choice of monument.

There is more about these wonderful tombs here.


After the consolidation of Protestant practice funerary monuments loose religious figures, the deceased pray into void, surrounded by their families, but without spiritual intercessors.
Similarly saints disappear from wall plaques, and only a few example survive showing the deceased praying to the Virgin Mary. Thereafter families face one another, the gap where the saint once stood closed up by the kneeling family membersthey very occasionally families face one another.


Monumental brasses appear often to have lost the figures and images of saints from the surround or canopy whilst the  figures of the deceased survive, although there were still vast losses, as can be seen in so many churches with rows of matrices, but no brasses.

A friend who is a great expert on monumental brasses has suggested that some at least were ripped up and traded to West Africa as part of the slave trade. They ened up in this theory as part of works such as the Benin bronzes. Certainly such a trade could explain the following, curious but remarkable survival from late medieval England:

This ewer was discovered in 1896 in the Asante kingdom on the west coast of Africa. It represents a rare survival of a lidded bronze vessel from the last years of the fourteenth century. The astonishing fact of its survival is matched by its intriguing find spot, proverbial inscription and royal heraldry.

On the front of the jug are the royal arms of England that were current from 1340 to 1405. The neck of the jug is decorated with six, symmetrically placed roundels containing a falcon with spread wings. Around the belly of the jug is an inscription in Lombardic letters which reads:
He that wyl not spare when he may
He shal not spend when he would
Deme the best in every dowt
Til the trowthe be tryid owte
('He that shall not save when he can
Shall not spend when he wants to.
Suppose the best in every fear
Until the truth is known').

Without the survival of the lid, it would not have been possible to date the ewer to the final years of the fourteenth century. Each of the seven facets of the lid contain a lion facing left and a stag couchant (lying down), without chain, facing right. The use of these devices place the manufacture of the jug firmly in the last years of the reign of Richard II, who used the symbol of the white hart between 1390 and 1399.
What brought the ewer to the west coast of Africa? Two other English bronze jugs from the late fourteenth century were found at Kumasi at the same time as this example. This may suggest that they left England as a set and that they all originated from the household of Richard II. However, the mystery behind their arrival at the Asante kingdom is still unsolved. A photograph from 1887 shows the jug placed under a sacred tree in a royal palace, suggesting that these items were held in high regard by the Asante people.

Sir Anthony Browne was Lady Fitzwilliam's son by her second husband, suggesting that he paid for the tombs both at Tickhill and Battle, the latter being unfinished at the time he made his will. Another alabaster tomb of the same sort is to Sir Thomas Unton, died 1533, and his wife Elizabeth at Faringdon, Berkshire.
I am not sure I buy the Benin bronze theory. If you were to melt a monumental brass down and recast it without knowing what you were doing, you would end up with copper, as the zinc in the brass would boil off before the copper reached its melting point.