Today is the appointed feast day of the Blessed Emperor Karl of Austria. The day was selected as it is the date of his wedding to the future Empress Zita in 1911, and their exemplary married life was recognised as part of his claim to beatification. This is covered on the official website for his cause at The Emperor Karl League of Prayers, and which has a biography, photographs and prayers for his canonization.

The Mad Monarchist blog has an illustrated profile of him at Blessed Emperor Charles I, and Roman Christendom has a blog post from 2008 which concentrates on the piety of the Emperor which can be read at The holy Peace Emperor: Feast Day of the Blessed Emperor Charles of Austria on 21 October. The blog Nobility and other Analogous Elites had a good post last year about him which can be read at Karl of Austria

The psalmody at several points in both Lauds and Vespers today, in the ordinary course of the psalter, appeared very apposite on a day I was observing for a beatified monarch, the successor of both Charlemagne, recognised as a beatus at least by the Catholic Church ( even if his canonisation was by an anti-Pope) and St Stephen of Hungary as founders of the Empire and of the Apostolic Kingdom.

Quite apart from his genuine attempts to end the war in 1917, if the Austro-Hungarian Empire had survived ,WAvoid tragic loss of life if empire had survived it would have by its very existence have been a means of preventing so much more dreadful bloodshed and misery for the peoples of Europe. 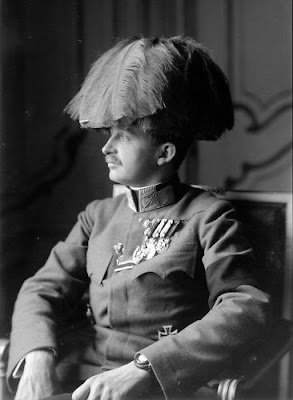 The Emperor in the uniform of a Field Marshal
The uniform mayhave been field-grey, but the plumes of the hat would be green. I assume the black arm-band is for the Emperor Francis Joseph.