Today is the 1115th anniversary of the death in 899 of King Alfred the Great. The only English King to be consistently so described he was born at Wantage in 849 and ruled Wessex from 871, and began the effective unification of England under the house of Cerdic.

Not only a capable military leader and administrator the King was also, famously, a patron of letters and learning, not least in his translation of St Gregory the Great's Pastoral Care, which can be accessed at Alfred. Preface to His Translation of Gregory's Pastoral Care. That is in itself a powerful indicator of what this ninth century King thought important for the lives and welfare of his people

Bishop Asser of Sherborne's biography of the King, dated to circa 888, can be read online by following the links given in the site at Asser's The Life Of King Alfred

There is an online modern account of his life and reign here, and the the most recent academic, and excellent, survey of his life by the late Patrick Wormold from the Oxford Dictionary of National Biography can be read at Alfred [Ælfred] .

Here in Oxford there are not only the links to King Alfred of his birth nearby at Wantage and the layout of the plan of the city streets by his immediate descendants but, of course, what is probably both the best known link to the King and the best known object in the Ashmolean Museum, the Alfred Jewel. This was discovered in 1693 at North Petherton near Athelney in Somerset, and given to the University in the early eighteenth century.

This is now considered to be the remains of an aestel - indeed the most impressive one of several to survive - which was a pointer used in public and liturgical readings. This links to the translation of the Pastoral Care, copies of which were sent out with aestels by the King. 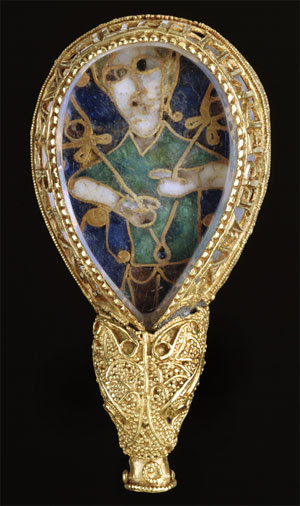 The Ashmolean has an illustrated and informative online piece about the Alfred Jewel and its context here, and there is another online account of this remarkable treasure and its function here. This has useful links to material and illustration relatings to other aestels from the period.