Yesterday evening I attended a Solemn Mass celebrated by the
Archbishop of Birmingham, The Most Rev. Bernard Longley, in
the chapel of Merton College to mark the 750th anniversary of
the foundation in 1264 of the College - more properly termed
The House or College of Scholars of Merton in the University
of Oxford.

King Edward I and Bishop Merton
Fifteenth century statues from the gatehouse of Merton
built by Warden Thomas Rudbourne circa 1417
Image:coolplaces.co.uk

The sculpture over the entrance gate


Founded by Walter de Merton, Bishop of Rochester, in 1264,
Merton if not the oldest college - a hotly contested point with
University and Balliol - is certainly the one which set the future
pattern of collegiate development. Thus Oriel at its foundation
in 1326 copied its statutes word for word from those of Merton.

The Chapel, dedicated to St Mary and St John the Baptist,
dominates the college and indeed the tower is a visual landmark
shared by its neighbours - as an Orielensis it appears to belong as
much to us as to Merton. 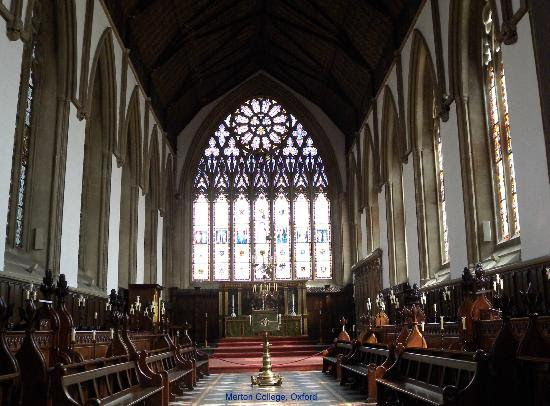 The Chapel, the choir of which was completed by 1294, is one of
greatest buildings in Oxford - and arguably the greatest. I cannot
exactly say why, but it just is. It retains much of its original late
thirteenth or early fourteenth century glazing, and the open space
necessary for the proper celebration of the Sarum liturgy and offices.

Wide-angle view of the chapel


The Mass was concelebrated at aforward altar, which I regret
given the very fine high altar the chapel possesses. In his sermon
the  rchbishop made reference to the first Mass celebratedin the
Chapel since the Reformation, which was in 1967, and to the
continuous tradition of reciting the psalter in the chapel since
the foundation of the college.