The town of Burton on Trent is well known for brewing, but once was better known as a place of prayer and pilgrimage, as it housed the shrine of St Modwen, whose feast day falls today. This post can also be seen as carrying on a theme I considered in the series I posted on English iconoclasm.


There are a series of detailed online accounts from a really excellent website about the history of the town. That about St Modwen and her cult can be viewed here, and the history of the Benedictine abbey founded in 1002 by Wulfric Spot which housed her relics can be seen here. The series of links it gives are well worth following up.

In the middle ages Burton did not have a seperate parish church, and the townspeople used the nave for worship. This was one reason why the abbey church survived the dissolution. Firstly this was as Burton College - I think this was an unfulfilled Henrician plan to make the abbey church a cathedral for a potential Derbyshire diocese - but the college was dissolved in 1545, and no new diocese created, and then it survived as the parish church. 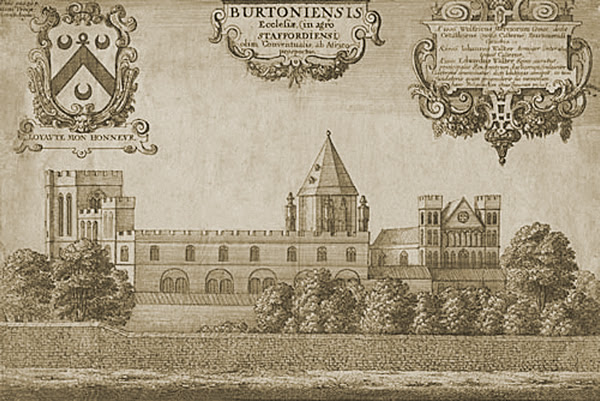 The most famous image of the abbey is this 1661 engraving from the river by Wenceslas Hollar. The writer of the website point sout that it does not entirely agree with known records, and suggests it uses ‘artistic license’ and is therefore, a partly speculative reconstruction drawing upon other Benedictine abbeys. However it does appear to agree with much of what is known about the abbey, and is a valuable source.

The webite explains how St. Modwen’s Old Church, predecessor of the current parish church, was part of the former monastic church which was reserved to the parish when the Crown granted the possessions of the dissolved Burton college, which had been temporarily establishedin the former abbey, to Sir William Paget in 1546. It comprised the aisled nave of seven bays, west tower, west porch, crossing with tower and spire, and the transepts. By 1603 the eastern arm, which had been granted to Paget, was in ruins and the arch separating it from the crossing was walled up.

However the building became dilapidated and in 1719-28 was rebuilt as the present handsome Georgian church. There is a section about this, including a plan indicating the size of the abbey church on the same website and it can be viewed here.

The abbey buildings now lie under the adjacent market hall in the town centre.

Fine as the present church is I cannot but lament the loss of what looks to have been a very interesting monastic church.