Metal objects which were not in themselves made of precious materials, but no longer in use liturgically, such as ciboria, were also unlikely to survive. Occasionally, however, they have.

The Warwick Ciborium was made circa 1150-75, probably in England or possibly in the Meuse valley.  It is decorated with Old Testament scenes, presented as types to prefigure events in the New Testament. So Isaac carrying the wood to his own sacrifice prefigured Christ carrying the cross to the Crucifixion. The verses on the ciborium are the same as captions which appeared with large images in Worcester Cathedral Priory - which shows how closely monumental and small-scale art in the period were related.

There is more about it in this piece by Daniel Mitsui:

This object was first recorded, with its cover already missing, in two eighteenth century watercolours in London and Oxford. A note on the back of the London drawing, by John Talman (died 1726) says: It was bought about August 1717 out of a Brasier's shop in London and is now in the possession of Mr George Holmes Deputy Record Keeper in the Tower of London. The ciborium passed into the collection of the Earls of Warwick in 1851. By the time it was exhibited at Manchester in 1857 the catalogue noted that the enamels are unfortunately nearly all destroyed. Further damage was caused during a fire at Warwick Castle in 1871.

The early history of the object is undocumented. However, the series of verses, some of them incomplete, which form a commentary to the scenes, are known to be based on verses formerly represented in the Norman Chapter House at Worcester Cathedral priory. These verses described a sequence of either paintings or stained glass windows. This fact, along with the English associations of related works, such as the Morgan and Balfour ciboria, and a crozier now in Florence, provide convincing evidence in favour of this piece having been made in England, possibly in the west of England.


The ciborium preserves one half of a decorative scheme known as typology - the systematic paralleling of Old and New Testament scenes, with explanatory verses. The Warwick ciborium lacks the New Testament scenes, but the choice of Old Testament images and the wording of the verses makes clear the original choice of New Testament subjects for the cover. We know that typological schemes of this type were also popular in monumental contexts in England from the work of antiquarians who recorded the verses, but images of this sort have not survived on this scale. The paintings or stained glass in Worcester were not the only images of this type in English Benedictine foundations - similar programmes of images existed in Bury St. Edmunds, Canterbury and Peterborough, although these all used different verses. The Warwick ciborium demonstrates that such systematic image programmes were considered equally applicable to small scale works of art, reflecting what might be characterised as a taste for learned and literate imagery amongst certain clerics at this period...

The Old Testament scenes are as follows: Moses and the burning bush; the Sacrifices of Cain and Abel; the Circumcision of Isaac; Isaac bearing the wood; Abraham about to sacrifice Isaac; Jonah issuing from the whale. Each scene is accompanied by explanatory verses on the border above. Inside, on the bottom of the bowl, is an image of a lamb (the Agnus Dei or Lamb of God).


Image and text: The Lion and the Cardinal


A second example is now also in the Victoria and Albert Museum:

This ciborium is one of the most important survivals of English metalwork from the twelfth century, and is dated to 1150-1175. It is enamelled with complex imagery consisting of complementary scenes from the Old Testament (on the bowl) and the New Testament (on the lid), all accompanied by rhyming verses in Latin. Image programmes of this sort were common on large and small-scale works of art in the twelfth century, reflecting a taste for learned and literate imagery amongst bishops, abbots and other clerics.


There is a tradition that in the sixteenth century, this piece was given to Sir James Balfour of Pittendreich by Mary Queen of Scots. The Queen may have received it as booty after the defeat of the Earl of Huntly in 1562, and it may possibly be identical with the laver 'with a cowp and cover of copper ennamaillet" listed in her inventory of that year.


Vestments were clearly vulnerable - as textiles the likelihood of decay was integral to them.  Not a few were remade as frontals or as coffin palls, as can be seen in various parish churches up and down the country, such as St John's Glastonbury, or in examples such as those I wrote about in  The Skenfrith Cope and in Medieval textiles for auction in Oxford earlier this year.

The Syon Cope, now in the Victoria and Albert Museum, was originally part of a voluminous chasuble made circa  1300-20. It takes its name from the Bridgettine convent of Syon in Middlesex, which was founded by King Henry V in 1414-15. It is probable that the nuns took the cope with them when they went into exile during the reign of Elizabeth I and that it was returned when part of the community was re-established in England in about 1810. 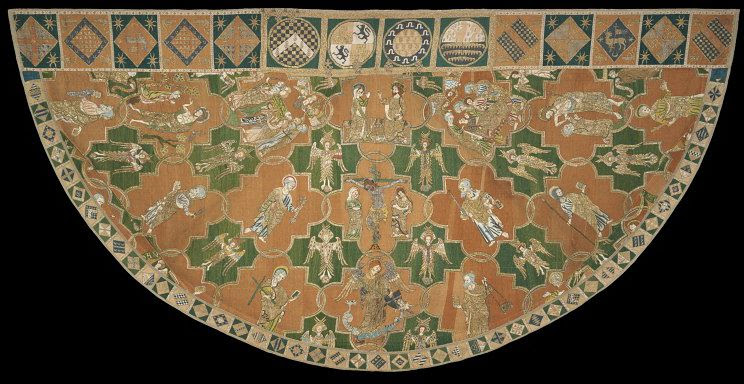 On the original vestment there would have been four rows (on the reconstituted cope there are three) of interlaced quatrefoil shaped compartments with scenes from the Life of the Virgin and the Life of Christ and the Apostles; the latter, seen in the fourth dismembered row, are not identifiable. Between the compartments are six winged seraphs and along the upper edge are the remains of angels holding crowns and the figures of two kneeling clerics, possibly representing the priest for whom the vestment was made. They hold scrolls with undecipherable Latin inscriptions.

Unique among surviving examples of opus anglicanum (the Latin term for English work, which was the high quality English embroidery known to have been bought by princes and Popes), the ground is entirely covered in red (now faded to brown) and green silk thread. The orphrey bands (decorative strips) with heraldic shields around the circumference and along the top edge of the cope are made from pieces of contemporary vestments. These may be purely decorative.

The embroidery is worked in silver-gilt and silver thread in underside couching, split, cross and plait stitches and laid and couched work. 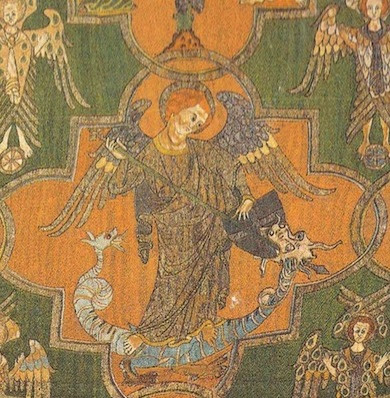 Detail of St Michael from the Syon Cope

In the collection at Towneley Hall at Burnley are a chasuble and dalmatic or tunicle (the third item of the set is in the Burrell Collection in Glasgow), which are the only High Mass set to survive from medieval England. Originally made about 1390-1420 or 1415-1435 (depending upon your expert) and remounted late in the fifteenth century, they were rescued from the Cistercian house of Whalley Abbey by the recusant Towneley family. The red fruits on the ground textile are probably pomegranetes. 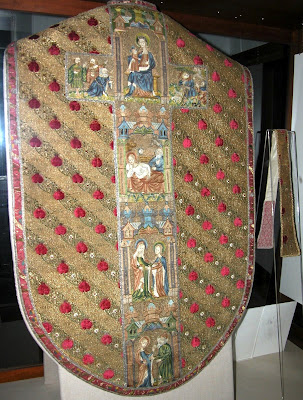 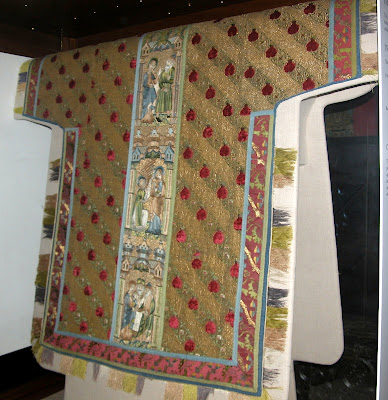 The vestments from Whalley Abbey, preserved at Towneley Hall 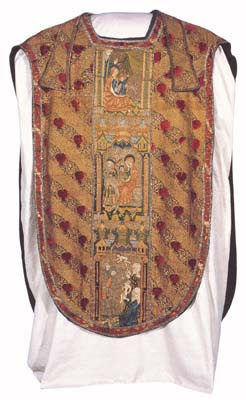 The front of the chasuble

Other like-minded families also preserved vestments , such as those saved by the Arundell family at Wardour in Wiltshire.