Nothing so encapsulates English iconoclasm in the Reformation period and in subsequent centuries than the attack on the cult, on the veneration, on almost even the name, of the Blesed Virgin Mary. Mary's Dowry appeared more tha anxious to expunger her from its collective life and worship.

I have already mentioned the 1538 burning of several famous statues of her as well as other devotional imagess, and in the first years of the Elizabethan settlement there were similar scenes - what I wonder did the good people of Sleaford in Lincolnshire think in 1560 when the Crucifix was taken out from their parish church of St Denys and burned in the market place outside?

Lady Chapels in churches attracted the attention of zealous reformers. At Ely cathedral the wondrous fourteenth century Lady Chapel lost all its glass and every statue in the canopy work around the arcades was meticulously decapitated.

The Lady Chapel of Ely Cathedral

As I heard Eamonn Duffy point out in a lecture here in Oxford folk-memory and shifting blame comes into play here: on a visit to Ely he heard a guide explain that this was all due to Oliver Cromwell (a local boy made bad on emight add), and ignoring the fact that the damage is the responsibility of the Bishop of Ely under King Edward VI... a case of blaming "the other".

(I will not comment on the rather bizarre figure of the Virgin which has been placed there in recent years and can be seen above the altar in the photograph - I am not sure who is to "blame " for that.)


In other case the church might survive, but the Lady Chapel was deemed extraneous and pulled doem to save on repairs or to provide stonework as at Tewkesbury abbey, saved by the townspeople at a scrap value of £453. Nonetheless the chapel, which contained tombs of fifteenth century lords of the manor and patrons of the abbey, was later demolished. 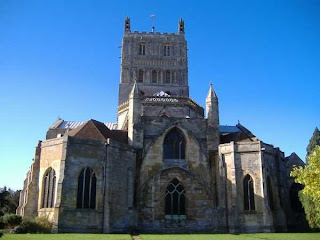 The site of the Lady Chapel at Tewkesbury Abbey

The line of the vault can be seen, and the foundations are marked out in the turf in the foreground


At Norwich cathedral the Lady Chapel was demolished and only partially rebuilt in the twentieth century as a memorial to the Great War, whilst at Peterborough the Lady Chapel, situated rather like that of Ely cathedral to the north-east of the main church, and free standing on three sides was demolished for its stone in the 1650s and a country house, Thorpe Park, built with the materials. 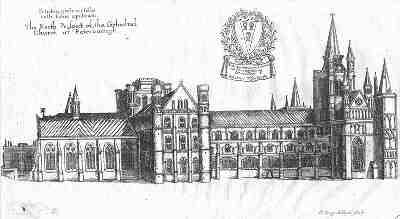 The Lady Chapel can be seen to the left of the north transept, and flanking the presbytery, whils the north-west tower still has a spire

At St Albans and at Sherborne the Lady Chapels survived because they were used as grammar schools until the nineteenth and early twentieth century restorations returned them to ecclesiastical use.

The English liturgy was purged of virtually all Marian devotions in 1548, and little survived beyond the feasts of her birth and, surprisingly perhaps, conception. In Oxford University the feast of the Assumption survived as a lesser commemoration, and as it still exists in the University Calendar.


In Oxford the University Church of St Mary the Virgin had a new porch built in 1636-37 by the mason Nicholas Stone at a cost of £230. This was adorned with a statue of the Virgin and Child, and in 1644 this was one of the capital charges  brought against Archbishop Laud by the Parliamentarians, on the basis that Laud as Chancellor of the University had sanctioned this. The statue had attracted the respect and indeed devotion of some University students and was blasted by a Parliamentarian musket when the army left the city at the beginning of the Civil War. A modern replacement now occupies the niche.

The South porch of St Mary the Virgin Oxford, with the statue of the Virgin and Child

Medieval statues which survived often did so in exile. Thus the statue now designated Our Lady of Westminster was, as the link explains, rediscovered and on sale in France in 1954, and acquired for Westminster Cathedral. A copy of it is now a replacement for the statue of Our Lady of Pew in Westminster Abbey, which appears to have been the original focus of King Richard II's vow of England to Our Lady as her Dowry in 1381. 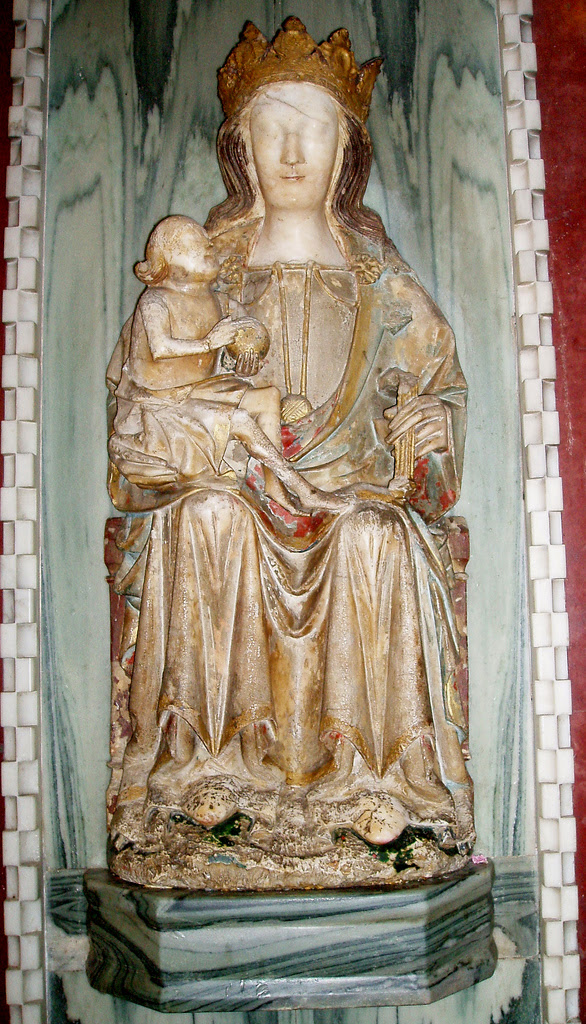 Our Lady of Westminster

In the link about the statue it is worth noting the reference to exports from 1550, with three ships loads heading for French cities. There is also the reference to a near identical figure, but headless, which was found in 1863 buried in the churchyard at Broughton in Craven. That was a recusant area, with the Tempest family as local lords. Maybe they decided decent burial was the appropriate thing for a vandalised statue.

In the crypt of York Minster is the statue now known as Our Lady of York. I think this was rediscovered during the restoration of the choir after the arson of 1829, and that it was found buried in the east wall. I wonder if, as an already old sculpture that was venerated, it had been re-enthtoned in Archbishop Thoresby's Lady Chapel in the late fourteenth century, vandalised in the sixteenth century and buried in the wall behind where it once was honoured? The statue of Our Lady of York
Image: carmelite.org


Vandalising statues in churches in your own country is one thing, but going abroad to do so is adding to the fault, and leads to the story of Our Lady Vulnerata at Vallodolid, which is as follows on the English College website :

In the great reredos of the Chapel of the English College, Valladolid, is the statue of Our Lady Vulnerata. The story of this statue begins in the reign of Queen Elizabeth I of England, in 1596. Spain had recovered from the defeat of the Invincible Armada and was gathering another fleet in the port of Cadiz, on the Atlantic coast of southern Spain. The Earl of Essex, together with Sir Walter Raleigh, led an English fleet into the harbour, destroyed the Spanish fleet and took possession of the city.
﻿
Some of the English troops ran riot and dragged a statue of the Virgin Mary and Child from a church to the market square where they desecrated it. They hacked at the face and cut off both arms. All that remained of the Child were parts of his tiny feet on His Mother's knee.

Image:sanalbano.org
The mutilated statue was given greater honour than ever and the Countess of Santa Gadea, wife of the Governor of Castille, gave it place of honour in her chapel in Madrid.
The staff and students of the English College in Valladolid asked the Countess for the right to make reparation for the behaviour of their fellow countrymen who had desecrated the statue. Reluctantly she agreed and the statue was brought to Valladolid and installed with great solemnity in the College Chapel in 1600. Queen Margaret of Austria, wife of King Philip III of Spain, who was present when the statue was installed, had asked for a novena in honour of Our Lady. On the last day of the novena the Bishop of Palencia gave the statue the title of Our Lady Vulnerata (which means wounded and insulted).
﻿
The Chapel was renovated in 1979 to mark its third centenary. More recently the façade was restored and the main doors renewed at the end of 1985; and the Chapel was opened to the public.

Every week, to this day, special prayers are offered in reparation for the insults to Our Lady and the Child Jesus and to implore the intercession of Our Lady Vulnerata for the conversion of the people of England and Wales.

Every year during Holy Week the statue is processed along the street, where it is met by a huge 'paso' or float, which has a large depiction of the Crucified Christ resting on top of it. The two images meet, and dance to each other for a brief period,  - then the Vulnerata comes back to the College.
The story of the statue is depicted in eight paintings around the walls of the College Chapel.
The Mass of Our Lady Vulnerata is celebrated in the College by special indult on the Sunday following the feast of the Immaculate Conception.
In the year 2000, the fourth Centenary of the arrival of the statue of Our Lady Vulnerata, after further renovation of the College Chapel, the statue was given a new crown, a gift from the old boys of the College, at a solemn ceremony on the Feast of the Forty Martyrs of England and Wales. 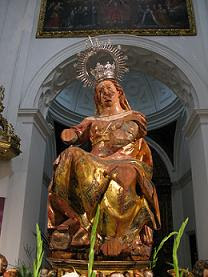 Prayer to Our Lady Vulnerata

Dear Mother, as I gaze on your wounded and mutilated image, I humbly beg your pardon for the grievous insults to you, great Mother of God. Help me to notice the wounded children of the world, and see your beauty in the faces of the poor and disfranchised. Let me love them better, as your Son commanded. I praise you through the faith, loyalty and blood of the missionaries who prayed for courage before your image, and I ask you to keep today’s missionaries in your loving care as they, too, carry the Good News throughout the world. Amen