Reading Fr Hunwicke's blog has reminded me that today is the 420th anniversary of the death in 1594 of the other Oriel Cardinal, and sometime head of its dependent academic Hall, St Mary's, Cardinal William Allen. He was to become the founder of the English College at Douai and later at Rheims, and a key figure in ensuring the survival of Catholicism in Elizabethan England through the missiopnary priest trained there. He was also a not very successful political intriguer in the English Catholic cause in his long years of exile on the continent. Fr Hunwicke's thoughts can be read at Two Williams, one cardinal's hat, one primatial cross

I should add to what Fr Hunwicke says that the scaffolding and polythene have now gone from the front of Oriel and the statue of Cardinal Allen can once more be seen looking out across the High towards St Mary's.

There is an online introduction to his career here, and the life of him by Eamon Duffy in the Oxford Dictionary of National Biography can be read at William Allen

The old Dictionary of National Biography account of his life can be accessed at William Allen,(1532-1594),  and the Catholic Encyclopaedia entry on him is at William Allen.

He is commemorated in the name of Allen Hall, the Westminster Seminary, and their website introduction to him can be read at Cardinal William Allen 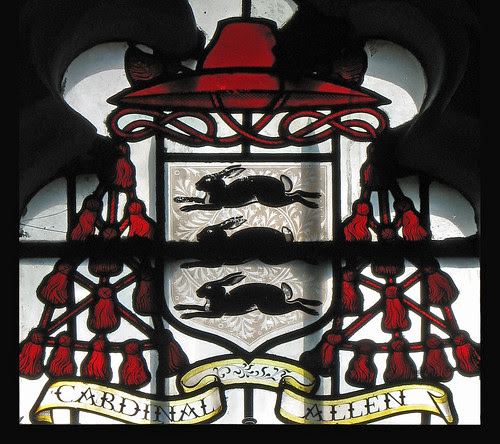 Thank you for this. I've been doing research on my Allen family and I think Cardinal Allen is part of it.
Carole Christensen
maecarole@hotmail.com