An evening with The Furies

Last Saturday evening I went with two friends to the Oxford Playhouse to see the Oxford Greek Play, a triennial event in which a classical Greek play is presented in the original language, but with modern staging and costuming, and with surtitles for those of us deficient in Classical Greek.

This year the production was of The Furies (The Eumenides), the concluding part of Aeschylus' Oresteia, first performed in 458 BC. I had not seen the play before, although I knew its basic structure and plot - it is, I suppose, incidentally, the first court room drama. There is much more about the play at Eumenides Study Guide, Book Notes, Summary, & Full Length Text . There is more about the legend of Orestes here.Three years ago I saw the previous such production, The Libation Bearers, the play which precedes it in the trilogy, and which is perhaps better known. I posted about that production in All Greek to me.


The house of Aetrius is one of the more, well, problematic dynasties one might encounter - you sense they were a family not at ease with themselves. Indeed as the Victorian lady commented after seeing Sarah Bernhardt as Cleopatra, "So unlike, so very unlike, the home life of our own dear Queen."

The Furies themselves made me wonder if I was witnessing some of the young female personages one sees heading off to the various night-clubs of Oxford on a weekend evening (one tries to practise custody of the eyes on such occasions) or a meeting of OUSU* Womens Committee.

In respect of the latter they would no doubt fault Aeschylus for not being feminist in that Apollo's defence of Orestes rested partly on the argument that his father had a greater claim on his loyalty than his mother. Apollo argued that it was Orestes' father, Agamemnon, who had borne him, not his mother, Clytemnestra, who was merely the carrier of the child. A biological view that is, even I would concede, a little outdated in terms of our knowledge of human reproductive sciences.

The real argument of the play is about taming forces of unremitting, unceasing vengeance and creating civil society by mobilising those elemental forces to underpin it, and the risk of anarchy if they are unleashed. To prevent this there has to be such a thing as society, and that has to have law as a means of control and as a means of giving true freedom to humans.

This was a good production of a text which is both simple and elemental and yet also complex and reflective. There is an online newspaper review of the production from the Oxford Student at “Frenzying, Maddening”: The Oxford Greek Play 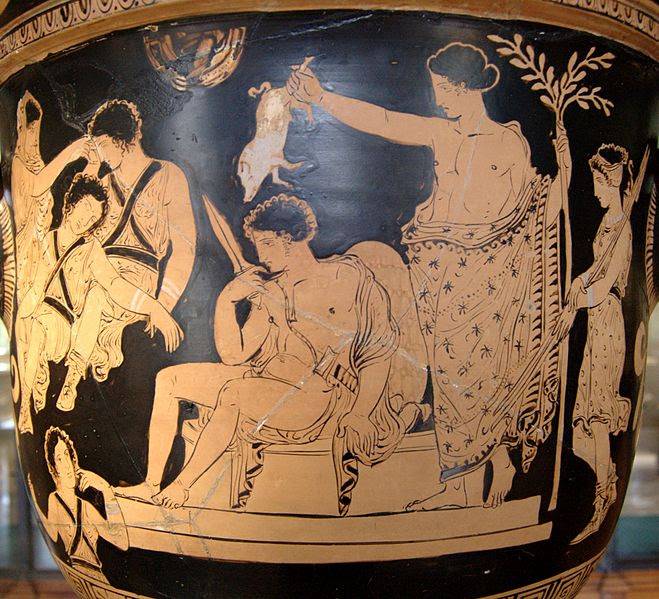 Orestes being purified by Apollo
Clytemnestra tries to awake the sleeping Erinyes/Furies to the left.
Side A from an Apulian red-figure bell-krater, 380–370 BC. From Armento?
Louvre Paris
Image;Wikimedia

* Oxford University Students Union - not to be confused with The Oxford Union.