We travelled from Clairvaux northwards across the open landscape of Champagne - not that interesting to be honest as landscapes go.

Our first point of call around Rheims was to be the gite where we were to spend the night. this was in the village of Chamery, south west of Rheims, nestling against the foot of the scarp and reached along roads flanked by vineyards.

The gite is the property of an independent champagne producer, the house of Bonnet - Ponson. Upon arrival we were offered, and accepted, a glass of their product, and bottles were bought for consumption with dinner this evening or to take home. We enquired about a tour of the cellars, and this was given to us. The cellars seemed far more extensive than the property at ground level - I wonder if the whole village, which has several such producers, is standing on a  honeycomb of champagne caves. We gathered that there were 500,000 bottles in the cellars, and the method of fermentation and the creation of champagne was explained to us, both in its old methods, and the newer, slightly more technological way of doing these things. Our hostess urges us not to keep champagne for too long - it is designe dto be drunk. Well, I suppose she would say that wouldn't she - but the champagne and the tour were excellent.

On the way back towards Rheims we stopped to look at the exterior of the church at Villers aux Noeuds. This was by the roadside, and, unusually for much of the France we had seen, still a medieval building - albeit missing its nave aisles, but with some nice eleventh or twelfth century work on the tower - a bit reminiscent of the type of churches one finds on the Wolds and other areas of eastern England where the population has shrunk, and the church with it.

Fr Jerome navigated the road system of Rheims through the rush hour traffic of a hot Friday and we parked near the abbey of St Remi.
The abbey is far less well known than the cathedral, but very well worth visiting, and geared to visitors and pilgrims. As at the cathedral it had a good guide book section, rather as one would expect in England, but which is much less common in France, and again had a cared for quality that is not always the impression amongst French churches.

The shrine church of St Remi, who baptised King Clovis in 496, the abbey was the repository of the Sainte Ampoule until the reliquary was smashed in 1793. There is a modern statue outside the present church depicting that momentous baptism, and set in the remains of the earlier church. 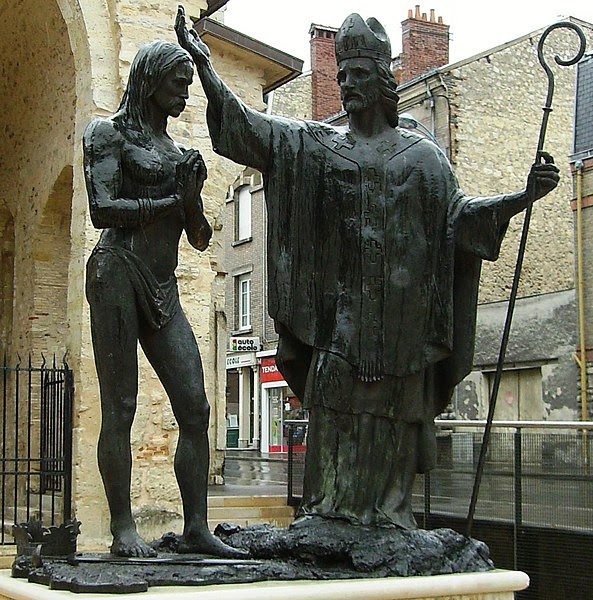 The Baptism of Clovis

One of our party was concerned that St Remi was not wearing a maniple, until we pointed out that the a baptism is outside the specific liturgy of the Mass

The present church is a very fine, indeed noble building, which was consecrated by Pope Leo IX in 1049 during the meeting of the Council of Rheims, often seen as the effective beginning of the Papal reform movement. Since then the choir has been rebuilt in the late twelfth century and the vave extended westwards by two bays at a similar date. The building was heavily damage din the bombardment of 1918, and the middle largely blown away; restoration was not completed until 1958. Looking at the building this is not apparent, and the result is a tranquil and prayerful building that bears witness to centuries of continuing piety.  Behind the High Altar is the shrine of St Remi - the structure is mostly nineteenth century work of 1847 but with seventeenth century statues of the traditional Twelve Peers of France.  Here one could pray in front of the casket containing the relics of the saint. 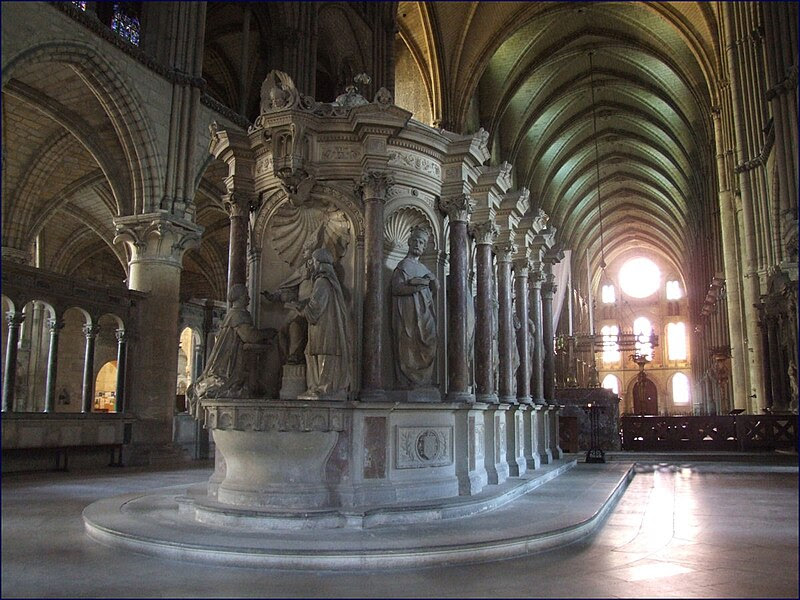 There were several medieval or later sculptures in the abbey of the baptism of Clovis, and it was consciously paired and linked to that of Christ. There is more about the abbey in the online article with many links, here.

The exterior of the church is impressive - a rich array of flying buttresses at the eastern apse, and a fine Flamboyant south transept front, but the west end is a little disappointing, and the lack of a dominant tower or spire means the building is not the landmark its architectural and historical importance would justify. 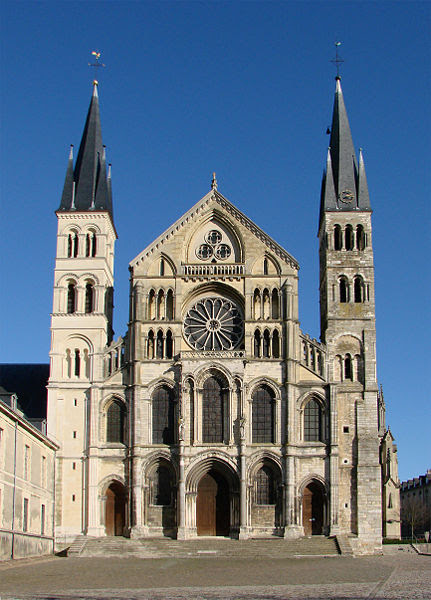 The west front of St Remi

It was in similarly bright  conditions that we saw the abbey

We walked towards the cathedral along what was once one of the coronation processional routes. Today - well it is not The Mall or Whitehall, or Edinburgh's Royal Mile - if anything it seemed more like Oxford's Cowley Road.

The city centre seems rather drab - small businesses in rather run down properties, larger blocks in a Hausmann style and, near St Remi, modern buildings presumably replacing post-1918 rebuilding. Really rather disappointing for so historic a city. Nonetheless the cathedral was in sight, and then, then we rounded the corner to enter the square in front of it...

As with the visit to Cluny I had put forward the suggestion that we visit Rheims, which is another place I have wanted to see for fifty or more years. So now, at last, we were standing in the hot late afternoon sun in front of Notre Dame of Rheims, the coronation church of the King's of France, one of the great monuments of thirteenth century French gothic art and architecture...

The west front of Rheims cathedral

This photograph gives some idea of the impact of our first sight of the building in the late afternoon sun - but no photograph does the cathedral justice
Image:neatnik2009.wordpress.com

However well one knows the west front from photographs or other pictures, nothing prepares you for the impact of this great combination of architecture and sculpture into one soaring, delicate, diffuse yet unified Te Deum or Magnificat. It is truly awe-inspiring, going beyond other related facades I have seen such as  Laon, Chartres and Paris. This is undoubtedly, to my mind, one of the greatest artistic works of Man. As one of our group said you could spend all day looking at the sculpture and still at the end find something more to see and comment upon. I found myself reduced to such meaningless phrases as saying I had seen other great French west fronts but that this really is something else ...
This is art and architecture calling you to worship and veneration. To stand as we did in front of the cathedral was for me at least a momentous experience.

The interior of the cathedral looking east

Image:neatnik2009.wordpress.com
The interior has a solemn grandeur befitting the importance of the see and cathedral, and is of one consistant design, giving it a sense of  unity. It combines grandeur with an elegant simplicity and has spaciousness that is largely uncluttered. Although busy with many visitors, they were not enough to detract from the atmosphere of prayer - there were many candle stands, aglow with votive lights, and the aisles had excellent wall banners outlining the history of the building, begin in 1211, and of the Sacre, last held there in 1825 for King Charles X. I noted with interest that the canopy of the archbishop's throne was hung in blue semee with gold fleur-de-lys. Is it a case of being prepared just in case? Looking west down the nave

Image:rogersandall.com
Outside we looked at the sculpture of the portal of the north transept, which includes one dorrway from an earlier building programme, before boarding the bus, which Fr Jerome had very kindly gone back and driven up for us. Time did not permit us avisit to the Palace of Tau which adjoins the cathedral and has exhibitions about the history and treasures of this great building. There is more about the cathedral and its history in the online article here.

Then it was off to a supermarket on the edge of the city to buy food for a meal at the gite in Chamery and back there to cook and eat, and relax.
Before leaving the theme of the cathedral here is another photograph which gives a better idea than many of the play of light on the statues and the interplay of structure and space, as well as of the range of detail, but you really need to go and look at Rheims to appreciate it. 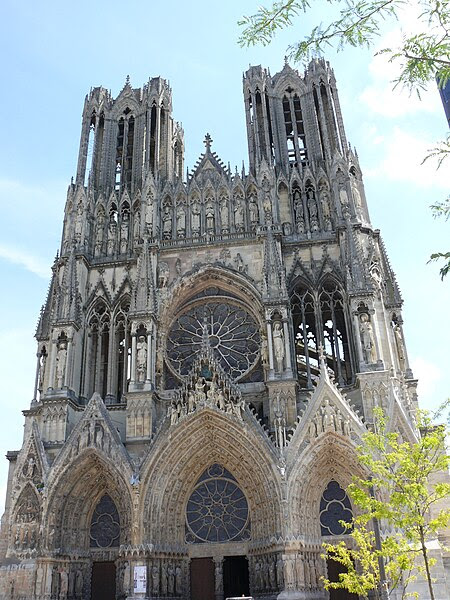 Image: Wikimedia
Posted by Once I Was A Clever Boy at 23:48