A day in Ars

We spent today in Ars, beginning with Mass in the Extraordinary Form at the Shrine of St John Marie in the delightfully exhuberant Basilica built in 1862 as an extension to his parish church. As we left we were met by Vincent, a Vietnamese seminarian who had been asked to look after us and show us around. 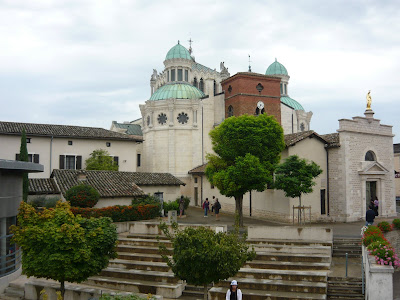 The old church to the right, with additions made by St Jean Marie, including the brick tower and the side chapels and behind it the basilica in Ars
Image;strayerfam.blogspot.co.uk

Explaining that we needed breakfast we went back to La Providence before joining him on a walk up to the Monument de la Rencentre, erected in 1938 on the hill south-east of the village. This commemortaes the meeting of the new Curé with the shepherd boy Antoine on 9 February 1818. Pere Vianney asked for directions to the village - it was perhaps a misty day, as otherwise the village would surely be in sight - and then said to the boy "You have shown me the way to Ars. I will show you the way to Heaven."  This is inscribed on the base of the statue.

The Oxford Pilgrims at the Monument with Fr Jerome Bertram

We went back to the Pilgrim's centre to watch an excellent film about the life of the Curé d'Ars, which brought out both his concern for parish ministry, and the fact that he is perhaps the supreme example of dedicated nineteenth century priests across Europe who sought to win and save souls through dedication to their parishioners and their welfare.

After this we visited his house, which is next to the Basilica. The rooms have been preserved or reconstructed as in the years 1818-1859, and items of clothing and other memorabilia as well as St Jean Marie's books have been preserved - he was, after all, quite a celebrity by the time of his death. Like Bl. John Henry Newman's room at Birmingham it is fascinating to see such interiors preserved as they were. 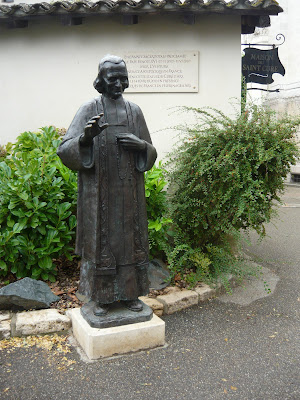 Modern life size statue of Saint John Vianney by the entrance to his house.
As is evident from his body in its chasse and surviving cassocks in the house he was aslightly built man.

After that we went to pray at the chapel which was built to house reliquary with the Curé's heart - which, of course, came to England for veneration last year, and the chapel of La Providence, itself established by the saint to look after and educate girls from the parish, which has Exposition of the Blessed Sacrament. 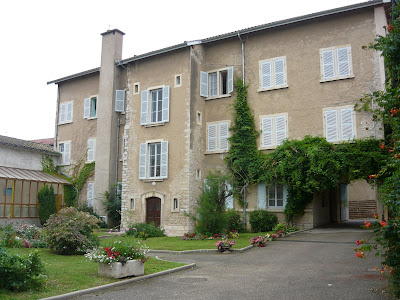 La Providence from the garden, the guest house in Ars, where we are staying

Image;strayerfam.blogspot.co.uk
The Sisters at La Providence provided us with an excellent lunch, a leisurely chatty occasion, before
we spent the afternoon pottering round the village. Ars is amore attractive village than many of those we had passed through, and although quite alot of the buildingsare relatively modern the area round teh basilica is probably much as it was in the early nineteenth century. Some of us visited the Carmel - today being the Feast of Our Lady of Carmel it seemed appropriate - and here too we found Exposition of the Sacrament, before going to the hotel we had dined at the previous evening and sitting outside in the warm sun to talk over coffee and iced tea.

In the eveningafter dinner we held our Brothers' Prayers in the Lady Chapel added to the original church by St Jean Marie and took an evening stroll up to the Monument de la Rencentre again.