Laon and Troyes and on to Ars


We left the motel in good time and drove up the hill into the old city, past the funicular, to Laon cathedral, and were looking around the interior of this great church dedicated to Notre Dame before 9. The atmosphere was of a building that was both cared for and prayerful. As were were early it was quiet, but I suspect it always has something of that quality - it is a bit off the main tourist routes. 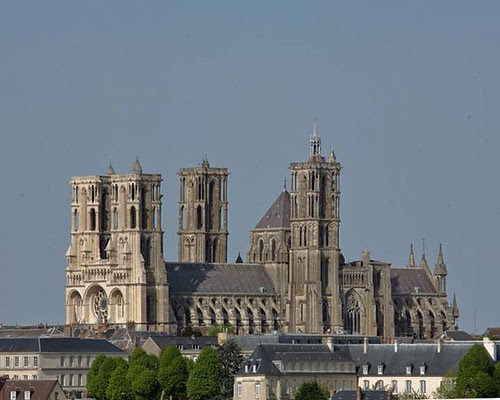 Laon cathedral from the south west

The setting is spectacular somehat reminiscent of Lincoln back in England. Laon cathedral with its five towers has a distinctive profile, crowning the hill on which the old city is situated. Built and rebuilt in the period from 1180 to 1230 it is very much of the era of King Philip II (1180-1223). There is more about if here.

Following Sir Richard Southern's interpretion earlier than that it was Anselm of Laon who at the beginning of the twelfth century was seen as an outstanding teacher who attracted pupils to study under him. From the rather cramped site in Laon they migrated to Paris, thus bringing into being the University there. In the cathedral the medieval glass of the north transept rose depicts the liberal arts. 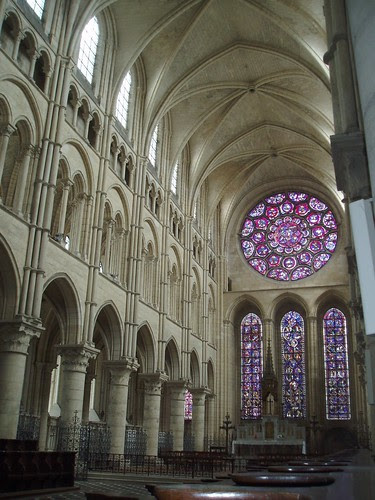 The choir of Laon cathedral.
Unusually for a French cathedral it does not end in an apse but, like most English cathedrals, with a square termination.

The cathedral is rich in early glass, incised slabs - of great interest to Fr Jerome - some interesting examples of surviving colour on stonework and elegant screens of sixteenth century date leading to the chantries built between the buttresses of the aisles. Many of these side chapels were still funished and it felt as if it is indeed used as a church - which is not always the impression I have had on previous visits to France.

Laon was an important bishopric, the Bishop being one of the six ecclesiastical Peers of France, with the privilege of carrying the Sante Ampoule at the coronation in Rheims, but the bishopric was not revived as an independent one after the unfortunate events in France at the end of the eighteenth century. 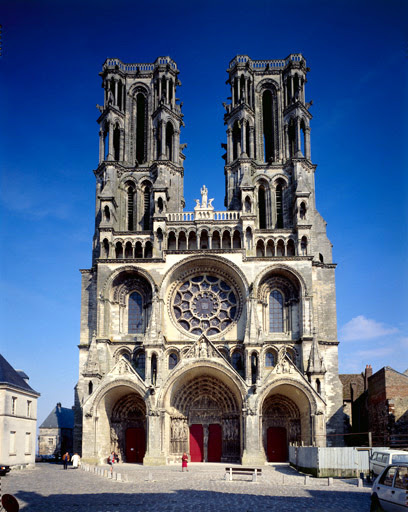 The west front of Laon cathedral

The cathedral is spacious and uncluttered, a building I liked, and very well worth visiting. Laon offers more than just the cathedral. It is a traditional French city, not too touristic or modernised. One can imagine the pre-1789 world of the canons. After a coffee in a cafe facing the great west front with its cavernous portals, and the famous carvings of the oxen on the towers we embarked, drove out through the line of the city walls and took the road south east.

Although we were somewhat delayed by a traffic diversion this took us through the ripening corn fields, reminding me of another point made by Sir Richard Southern - the wealth generated by the rich cornlands of northern France which financed the rise of the Capetian monarchy and the great buildings of the twelfth and thirteenth century.

Along our route I noticed several wayside shrines - crucifixes or statues - of the type my memory assocaites with images of rural France seen as a boy - it is good to see they stuill survive.

We caught aglimpse of Rheims cathedral from the distance as we went on the by-pass - we plan to stop there on our return. Then it was across the flat lands of Champagne towards Troyes, the old capital of the county.

The outskirts of the city appeared rather run down, but the old centre has a wealth of timber framed buildings and several striking large late medieval churches - although we did not get into them - as well as the impressive cathedral of St Pierre and St Paul. Not one of the best known amongst the great medieval cathedrals of France it follows the standard plan, and like so many was never completed - it only has a north west tower, and the west fron was clearly never completed with all its envisaged sculpture and decoration. 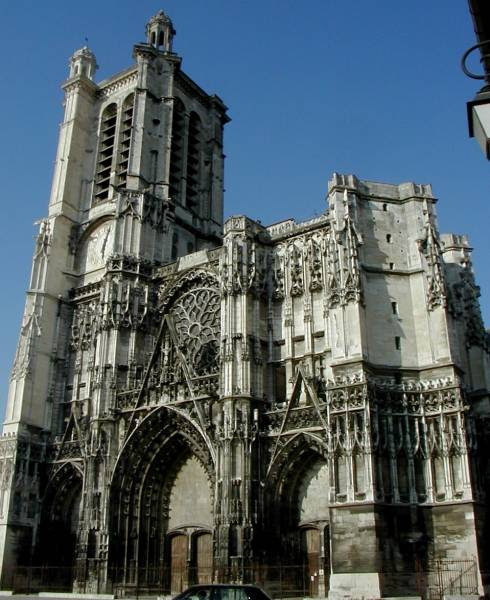 The incomplete but splendid west front of Troyes cathedral

Nonetheless it is a fine building and possesses a great array of medieval and sixteenth century stained glass in its splendid windows - the walls are reduced to a minimum and the galzing expanded to the maximum with the use of sinuous and flowing bar tracery - a delight to the eye. There is more about the cathedral here.

Whoever is in charge of it has a fondness for altars of rough stone with glass tops, and the tabernacle in the Blessed Sacrament chapel off the south transept was again a confection of glass - in this instance large coloured beads. The side altars in the chapels were still in place and useable, and there was again a sense of spacious dignity to the cathedral, and, like Laon, it had a prayerful quality that was clearly maintained. 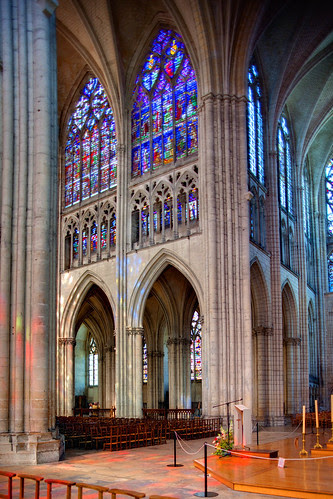 The crossing of Troyes cathedral

I was particularly interested to be in Troyes because it was there that the Treaty of 1420 was negotiated and signed whereby King Henry V became Regent and Heir of France, with a view to the union of the crowns of England and France in him and his successors. The Treaty is said to have been signe din the cathedral, and it was there or in the church of St Jean that King Henry married Catherine, daughter of KIng Charles VI. Oddly enough there was no mention of this Treaty in the city, merely a plaque on the cathedral recording the fifth centenary of the visit by Joan of Arc and King Charles VII in 1429 - funny that....

Troyes also has a fine former charitable hospital from the later paert of the reign of King Louis XIVwith fine ironwork gates resplendent with the French royal arms in blue and gold. I do not think anything is now visible of the chateau of the Counts of Champagne, where Chretien of Troyes entertained Marie de France and others with his verse in the twelfth century, though we were close to the site.

Troyes is once again a cathedral and city I liked - you could imagine living there in its slightly decrepit but picturesque surroundings.

We resumed our journey across Champagne and Burgundy, around Dijon and down to the Saone and on to Ars. Delays on the journey meant we were too late to eat at La Providence, the pilgrim's hostel at which we were staying, but it meant that as we were fasting we were able to have Mass, celebrated by Fr Jerome in the small crypt under the old church where St Jean Marie's body had been enshrined before its translation to the basilica above at the time of his canonisation. The church is much as he left it, and must now be a rare survival of what a French village church was like in the first half of the nineteenth century - so many rural churches appear to be bland late nineteenth century rebuildings of an unexceptional blandness .

After that we went off to ahotel and found a good meal, eaten outside on a warm night, before walking back to our comfortable rooms at La Providence.