On Saturday I attended the Latin Mass Society's Oxford Pilgrimage, with a Solemn High Mass at Blackfriars in the traditional Dominican Rite, and, in the afternoon, a procession to the site of the martyrdom of Bl.George Napier in Oxford Castle and Benediction, again at Blackfriars.

Dr Joe Shaw, the Chairman of the LMS has now posted on his blog two reports about the day, complete with fine sets of photographs. The first covers the Mass and can be viewed at Oxford Pilgrimage 2012. The photographs show very well the beauty of the Dominican liturgy, which is very similar to the Use of Sarum. The second report covers the procession and Benediction, and can be seen at Oxford Pilgrimage: Procession and Benediction. Those readers who know me should be able to spot me in at least one photograph of the procession.

Here is one of the photographs of the Mass, showing the elevation of the chalice: 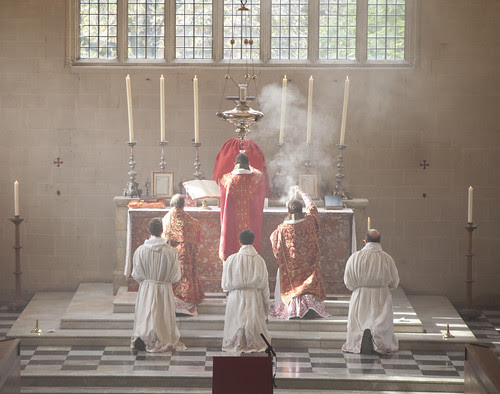 
There is also a report from two years ago of the Pilgrimage Mass, also celebrated in Blackfriars, but on that occasion in the Extraordinary Form, and in the presence of the Archbishop of Birmingham. I am partly (but only partly) including the link out of vanity (sic) as I appear as thurifer in some of the pictures - you have been warned... The article can be seen at LMS Pilgrimage to Oxford 2010.
Posted by Once I Was A Clever Boy at 14:13