Today is the feast of St Frideswide the patron saint of Oxford, and indeed, the foundress of the city. Her monastic community appears to have been the first permanent settlement here, and from that developed the University. So she is rightly venerated as patron of both town and gown. I thought the psalm verse in today's propers for a Virgin in the Divine Office, "Thou shalt have sons instead of thy fathers Thou shalt make them princes over all the earth" (Ps 44/45) could be applied to the success of Oxford men, and indeed women, educated by this University under St Fridewide's patronage.

There is an illustrated online account of her life and cult here. 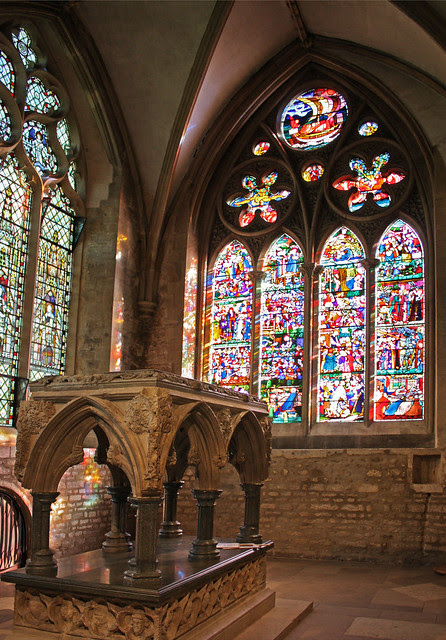 The base of St Fridewide's shrine as reassembled in what is now considered to have been its original site in Christ Church Cathedral in Oxford.

The stained glass window to the east of the shrine is by Edward Burne-Jones and tells the story of St Frideswide. It is said that Burne-Jones became so irritated with the authorities at Christ Church over the commission that he took his revenge by including a very nineteenth century water closet in the background of one of the scenes.

One of the places tradition associates with St Frideswide is the church of St Margaret at Binsey, just west of the city centre and a rural oasis by the streams of the Thames, but within the modern ring-road. The site is claimed as one where St Frideswide hid from Algar, and St Margaret was a virgin saint associated with deliverance from enemies. The church is a simple early Norman structure with a numinous atmosphere.

Binsey church from the east

In the churchyard, immediately west of the church is St Margaret's Well, from whence some legends claim St Fridewide drew water to heal Algar's blindness. By the late middle ages this acquired a protective well house described by the antiquarian Thomas Hearne in the early eighteenth century. This has disappeared and the well as it is today is the result of a restoration in 1874. It is also claimed to be the inspiration for the Teacle Well in Alice's Adventures in Wonderland  - treacle here means, as in the "Treacle Bible", balm or healing. 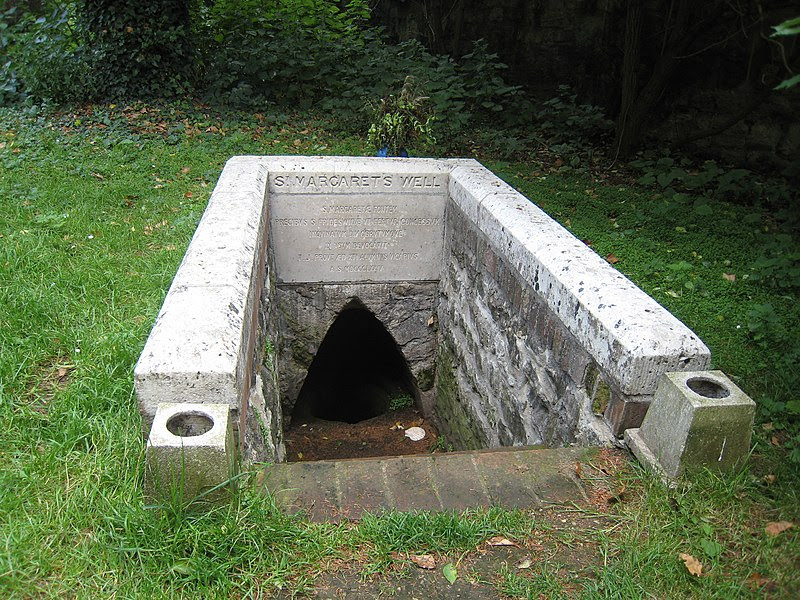 The Holy Well in Binsey churchyard