Today is the feast of St Paulinus who as Apostle of Northumbria on the Gregorian mission  became the first Bishop of York in 627, and after his return south in the wake of the battle of Hatfield in 632 served as Bishop of Rochester until his death in 644. The life of him by Marios Costombeys in the Oxford DNB can he read here.
Anyone planning a pilgrimage to the north in his footseps might well go not only to York where he baptised King Edwin on the site of the Minster on Easter Day 627, but also Goodmanham, where the pagan High Priest Coifi destroyed his own temple, Yeavering where Paulinus preached to the Northumbrian court, and to the places where tradition asserts he conducted baptisms - Attleborough on the Trent, Catterick on the Swale and, well, Dewsbury.

I put it like that because Dewsbury, on the banks of the Calder, is, frankly, not a town one immediately associates with pilgrimage or an ancient history. This is unfair, but like Slough and Scunthorpe the very name conjures up a mental stereotype that is, somehow, uninviting. In reality Dewsbury has an interesting history, as outlined in this online article which can be read here, although there is little that is pre-Industrial revolution to see - the interesting medieval rectory Moot Hall was, shockingly, demolished for the ring road in 1962.

As the article demonstrates it is the very name which may hold the clue to Dewsbury's significance. Different interpretations strss eithe rits riparian importance in the valley or if the referred choice is that is Dewi's burh, then it may well, with a British rather than an Anglian place name be an important centre with one of the churches abandoned by the British clergy when the Kingdon of Elmet (possibly, roughly the modern, administrative county of West Yorkshire) had been conquered a decade earlier, and to which Paulinus refers in his letters. The tradition of Paulinus baptising at Deswbury is an old one and that this is the site of Campodonum.

Little of the present church is even medieval - most is Georgian or nineteenth century, dressed up in pseudo-medieval style. It does have the enduring tradition of the Devil's Knell being tolled on Christmas Eve - one strike of the bell for the number of the year - in atonement for or commemoration of a fourteenth century murder by Sir Thomas Soothill, as mentioned in the link above. Today it rejoices in the status of a Minster, and the parish website gives a useful account of the Paulinus tradition and of other aspects of local church history. It can be accessed here and by clicking on the 'Heritage' section and following the links.

I do not know Dewsbury well, although I have a slight family connection to the town, but it's place in the story of St Paulinus and his evangelisation of Northumbria is a reminder that there is always more to the history of a town or village than immediately meets the eye. 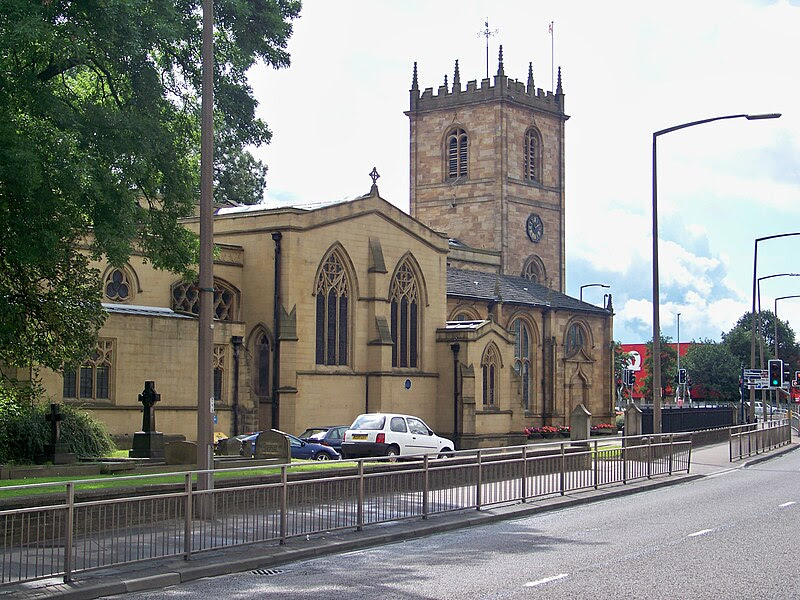