Today is the feast of St Thomas of Hereford, a day which is observed here in Oxford in that he was born in Buckinghamshire and that he served as Chancellor of the University. My post from last year about him, with its links and pictures, can be seen at  St Thomas of Hereford.
To the links I would add this site about his life which can be read here.


A conscientious  Bishop of Hereford from 1275 his conflict with Archbishop John Pecham of Canterbury led to his excommunication and his journey in March 1282 to appeal to Pope Martin IV. Although he received absolution, he died of fever on 25 August 1282.  His bones were brought back to Hereford and buried in the north transept. It is this tomb which has been restored in recent years as a new shrine. On Easter Monday 1287, a series of miracles began, which lasted well into the fourteenth century.
When reviewed by Commissioners in 1307,  over 400 miracles had been recorded – second only to St Thomas Becket in Canterbury. These are well documented in the surviving canonisation depositions. Modern writers, such as Canon Bannister, the great early twentieth century historian of the cathedral in Hereford, may have tended to be sceptical about how medieval people misdiagnosed illnesses or seeming death, but the accounts are rich in circumstantial detail.  In consequence Bishop Thomas Cantilupe was canonised in 1320 and 2 October was designated as his feast day.

On 25 October 1349 his remains were translated to a new shrine in the Lady chapel and new effigies of bishops were provided either side of the processional aisles, to lead pilgrims to the greatest of all the bishops, the new saint of Hereford. At the same time, offerings at the shrine of St. Thomas helped re-build parts of the cathedral – notably the central tower, with its ball-flower decoration.

In the late fourteenth century, the cult of St. Thomas declined - there are fashions in saints as in most things - and in the late 1540s, the shrine itself was destroyed, and the relics dispersed. However, devotion to St. Thomas continued in a modest fashion and there is evidence of his relics being used in a procession in Hereford in 1610, to ward off plague. (Adapted from Hereford cathedral website with my own comments on the miracle evidence and the fashion in saints.)

The skull of St Thomas is now preserved in a reliquary at Downside Abbey.


Last year I wrote that there appeared to be no contemporary depictions of him, although it is recorded that he had red hair, and the corresponding temperament. However I had forgotten his own public image on his episcopal seal: 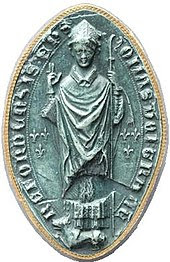 Legend: TOMAS DEI GRATIA HEREFORDENSIS EP(ISCOPU)S (Thomas by the grace of God Bishop of Hereford).
The arms of Cantilupe ancient are displayed on each side of the bishop: 3 fleurs-de-lys. Hereford Cathedral Archives 6460.


There is also this stained glass figure from the time of his canonisation. The artist appears to have given him red hair. 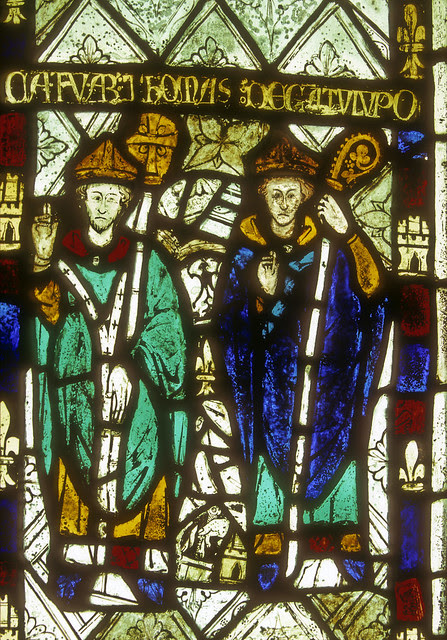 This has been dated to circa 1300, but I suspect that it dates from the time of the canonisation of St Thomas in 1320. The pairing with St Thomas of Canterbury is significant, and may point to the number of miracles attributed to their intercession. 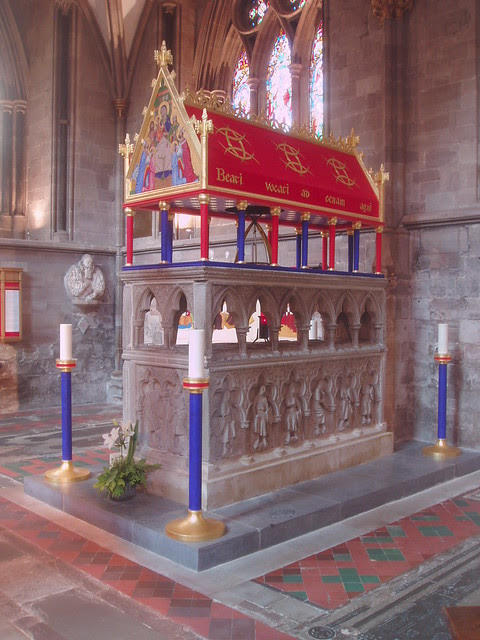 The restored first shrine of St Thomas in Hereford Cathedral

Image: Aidan McRae Thomson on Flickr
Posted by Once I Was A Clever Boy at 10:06