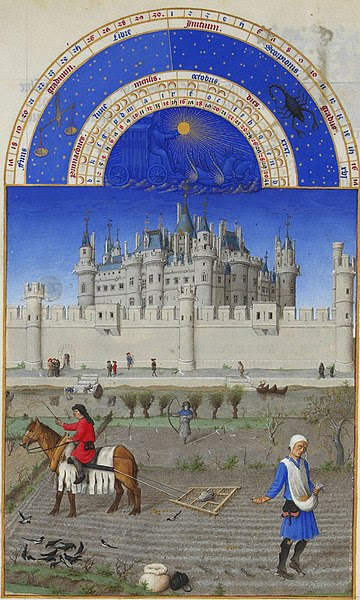 Image: Wikipedia
This calendar page in the Très Riches Heures of John Duke of Berry is attributed to Paul Limbourg with possible additions by Jean Colombe in the 1480s
The scene in the foreground is winter sowing and harrowing, with crows and magpies eating some of the seeds. The harrow is horse drawn rather than by oxen. Beyond there is an archery in the middle ground with pollarded willows on the river bank. Meanwhile in the background people walk by the Seine, across which small boats ply. Once again this is a tranquil, reassuring scene of agricultural harmony. This is an idealised view as the building which dominates the scene is the palace of the Louvre, then at the western end of Paris, but the foreground would have been built up as it would be part of the Ile de la Cite.

The Louvre was originally built by King Philip II (1180-1223)  - the impressive foundations of his fortress are once again visible in the basement of the museum complex - but the Louvre as depicted was the result of its  remodelling as a residence by Duke John's elder brother, King Charles V, after his accession to the throne in 1364. As at Saumur in last month's illustration the palace fortress is decorated with elaborate finials and the chimneys point to domestic comfort inside the royal residence.