Today is the feast of St. Romanus  or Romain, the former chancellor of  King Clotaire II who was subsequently made Bishop of Rouen from 631until 641. As the online life of him in the link shows he is at the centre of many legends.
The most famous of these that sprang up around his name e name of St Romanus, relates how he delivered the country around Rouen from a monster called Gargouille or Goji. La Gargouille is said to have been the typical dragon with batlike wings, a long neck, and the ability to breathe fire from its mouth. There are multiple versions of the story, either that St. Romanus subdued the creature with a crucifix, or he captured the creature with the help of the only volunteer, a condemned man. In each, the monster is led back, lassoed by the episcopal stole to Rouen and burned, but its head and neck would not burn due to being tempered by its own fiery breath. The head was then mounted on the walls of the newly built church to scare off evil spirits, and used for protection.
In commemoration of St. Romain, the Archbishops of Rouen were granted the right to set a prisoner free on the day that the reliquary of the saint was carried in procession on Ascension Day.

- adapted from the Wikipedia article "Gargoyle"
A similar story is told of the Welsh born St Armel,  who died c.570 as a bishop in Brittany.

There is more about the legend and its background in Ernest Ingersoll Dragons and dragon lore , published in 1928, which can be accessed online.

St Romanus, La Gargouille and the condemned man
Image: de.drachen.wikia
Romanus' cult was not confined to France, as can be seen in this painting from fourteenth century Bohemia:

In the church of St Godard in Rouen is this window, given in 1540, which tells the story of the mirtacles of St Romanus:

There are some fine photographs of the individual panels with explanatory notes here.

The tradition that arose of commemorating St Romanus' deliverance of his people from La Gargouille with the assistance of a condemned man led to the Privilege of St Romain, which lasted from 1156 until 1790.
By this the chapter of Rouen, which consisted of  the Archbishop, the Dean, fifty canons, and ten prebendaries, and was one of the wealthiest ecclesiastical corporations in western Christendom, had from the year 1156,  the annual privilege of pardoning, on Ascension Day, some individual confined within the jurisdiction of the city for murder.
On the morning of Ascension Day, the chapter, having heard many examinations and confessions read, proceeded to the election of the criminal who was to be pardoned; and, the choice being made, his name was transmitted in writing to the Parlement, which assembled on that day at the palace. The Parlement then walked in procession to the Great Chamber, where the prisoner was brought before them in irons, and placed on a stool; he was informed that the choice had fallen upon him, and that he was entitled to the Privilege of St Romain.

After these preliminaries, he was delivered into the hands of the chaplain, who, accompanied by fifty armed men, conveyed him to a chamber, where the chains were taken from his legs and bound about his arms; and in this condition he was conducted to a place named the Old Tower, where he awaited the coming of the procession.
After some little time had elapsed, the procession set out from the cathedral; two of the canons bearing the shrine in which the relics of St. Romain were presumed to be preserved. When they had arrived at the Old Tower, the shrine was placed in the chapel, opposite to the criminal, who appeared kneeling, with the chains on his arms. Then one of the canons, having made him repeat the confession, said the prayers usual at the time of giving absolution; after which the prisoner still kneeling, lifted up the shrine three times, amid the acclamations of the people assembled to behold the ceremony.
The procession then returned to the cathedral, followed by the criminal, wearing a chaplet of flowers on his head, and carrying the shrine of the saint. After Mass had been celebrated, he had a very serious exhortation addressed to him by a monk; and, lastly, he was conducted to an apartment near the cathedral, and was supplied with refreshments and a bed for that night. In the morning he was dismissed.
The Privilege was abolished in 1790 in the early stages of the French revolution.

-adapted from the Wikipedia article "Privilege of St Romain".


The oldest part of the present cathedral in Rouen is the north-west tower, built about 1160, and named in honour of St Romain. There is an online article about the cathedral here, and a set of fine photographs of it here.
I think Rouen appeals to me as one of my favourites amongst French cathedrals not only because of the historic links between the cathedral and the history of the Anglo-Norman world, but because more than any other French cathedral it satisfies the English love of great central towers and spires and a west front with tall, commanding towers. 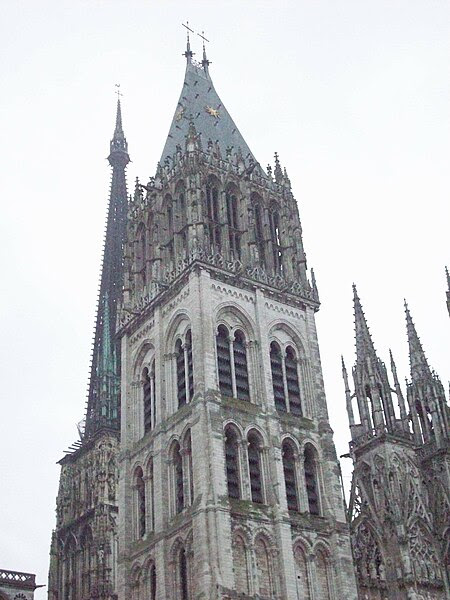 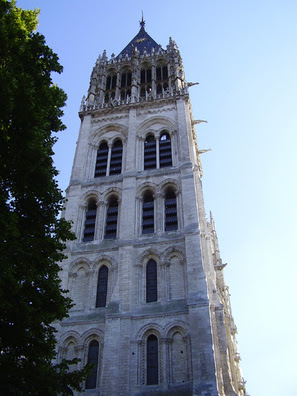 The Tour St Romain from the north
Image: chocolatechipcookies.blog.com