There has been much excitement over the last thirty six hours in the blogosphere and amongst those with an eye for these things about the fact that the Pope wore the Papal fanon at yesterday's canonization Mass in St Peter's Square. 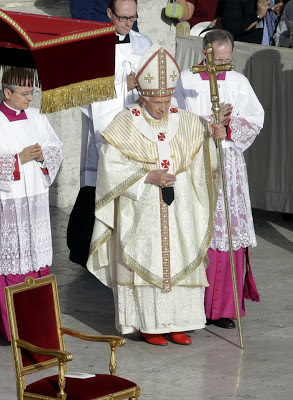 The Pope vested with the fanon

I am delighted to see the return of this ancient vestment, about whose history and development there is an online article here.There are photographs of the Pope yesterday on the New Liturgical Movement site which can be viewed here.

The question as to why the Pope has restored the use of the fanon now, and not at an earlier time, may be in part answered by the article on Rorate Caeli, which links it to a number of quite significant restorations of practice in the canonization liturgy, and which can be read here. This is not, then, a case of finding something in the "Papal dressing -up box" , as might explain the solitary use of the fanon by Pope John Paul II,  but a considered change by the Pope and Mgr Marini.

One thing which struck me on some of the photographs I have seen is the style of the Papal throne erected for the occasion - much more what one would have seen fifty and more years ago.