Today is the ninetieth anniversary of the coronation of King Ferdinand I of Romania and his consort Queen Marie at Alba Iulia in Transylvania. It had been st Alba Iulia on December 1 1918 that the vote to accede to the Romanian Kingdom was given by Transylvanian representitives, and the city had been the capital of the previous unified Romanian monarchy, that of Michael the Brave from 1599 to 1601. The coronation took place at the Romanian Orthodox Cathedral of the Reunion, built in 1921-22, next to the medieval Catholic cathedral. Both are within the eighteenth century Alba Carolina fortess built under the Emperor Charles VI.

King Ferdinand I and Queen Marie of Romania
following their Coronations on October 15, 1922, in Alba Iulia.

King Ferdinand I of Romania and his wife Queen Marie were crowned in a non-denominational ceremony on October 15, 1922, in the square in front of the Coronation Cathedral of the Reunification.  The ceremony was non- denominational because, although Romania was overwhelmingly Orthodox, the King was a devout Catholic and his wife was then an Anglican.

King Ferdinand's two successors, King Carol II and King Mihai I, however, had only swearing-in ceremonies. King Carol II, upon ascending the Throne in the summer of 1930, did schedule a coronation in Alba Iulia for the following September; but, a few weeks before the planned ceremony, the coronation was postponed and was never to be re-scheduled, because of the complicated situation with Carol's ex-wife, Queen Helen, who due to their divorce obviously could not be crowned with him, but was nonetheless living in Romania as "Queen Mother Helen" or Her Majesty Helen.

The Coronation was very much a celebration of the post-war unification of the Romanian people under one King. thus the pre-war kingdom based on Wallachia and Moldavia was now unired to Bessarabia [ now Moldova], Transylvania and the Dobruja. The diplomacy at the Paris Peace Conference which achieved this owed no little part of its success to Queen Marie's presence, and the Coronation was very much her day. As the links above show, she was a somewhat larger-than-life figure, who won the hearts of her Romanian subjects by he enthusiastic support of the national cause during the First World War and the subsequent developments. Here are views from a set of postcards of the ceremony:

Two sisters, H.M. Queen Elizabeth of Greece and H.M. Queen Marie of the Kingdom of the Serbs, Croats and Slovenes, at the Coronation of their parents. The Queens are followed by T.R.H. Princess Irene of Greece, Princess Ileana of Romania and Grand Duchess Viktoria Fyodorovna of Russia.

Queen Marie in her Coronation robes and crown
Image:hoover.org

Queen Marie's own account of the coronation can be read in the illustrated article which can be found here.
There is information about one of the items of jewellery worn by the Queen, a spectacular sapphire, here  and here - the latter has an expandable link to Philip de Lazlo's 1924 Coronation portrait of the Queen.

A commemorative medal  for the Coronation
Image: e-bay 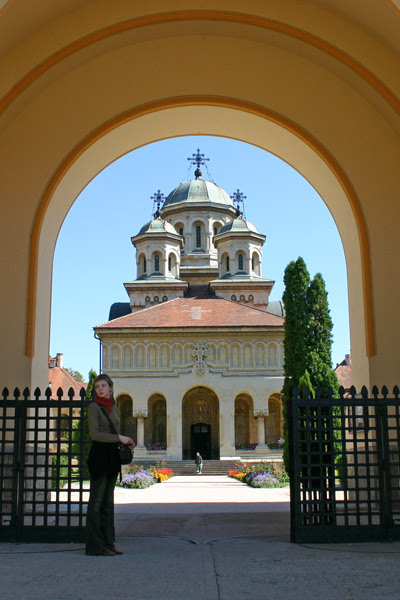 The Romanian Orthodox Cathedral of the Reunification built in Alba Iulia in 1921-22, and the setting for for the coronation