Vatican II and other Councils fifty years on

Today is the fiftieth anniversary of the opening by Pope John XXIII of the Second Vatican Council in 1962. 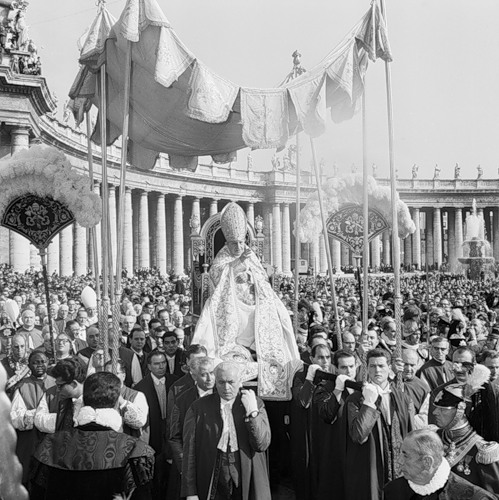 Image: offerimustibidomine.blogspot
The Pope's speech, which he delivered at the opening session, can be read here.  It repays reading, and asking the question as to whether the Council achieved Pope John's aims for it

On the basis of this fiftieth anniversary, and the twentieth anniversary of the publication of one of its fruits, the Catechism of the Catholic Church, the  present Pope has declared 2012-13 the Year of Faith both to mark these anniversaries and to build upon what they represent. That would appear to be a positive way of applying, and perhaps, reclaiming, the heritage of Vatican II.

Thinking about this I was struck by the thought that the fiftieth anniversaries of the opening of Ecumenical Councils have not always been auspicious. In case you need to brush up your knowledge of the Ecumenical Councils, and indeed which Councils are deemed Ecumenical, and by whom, there is an on-line introduction here.

The fiftieth anniversary of Nicea, which met in 325, fell in 375, in the lead-up to Constantinople I which met -in 381, and in a slightly amended form, ratified the Nicene Creed. So far, so good.
Fifty years later, in 431 the Council of Ephesus was held and proclaimed the Virgin Mary as Mother of God; within twenty years, and one dubious council in 449 later, in 451 there was the Council of Chalcedon, whose Christological definitions consolidated taht which was Catholic and Orthodox, but provoked schisms in the East which still endure.
Passing over other meetings which did, or did not help the unity of all Christians, to those later Councils of the Catholic Church in the post-Gregorian era the first to really strike one is , of course, Lateran IV in 1215. Fifty years later Innocent III's achievement was a consolidated fact and shaping the life and practise of the Western Church.

Lyons I in 1245 deposed the Holy Roman Emperor Frederick II; fifty years later he and the Hohenstaufen were indeed past history, bu at a terrible cost to individuals and institutions, not least the Papacy.
Lyons II in 1274 proclaimed unity with the Orthodox: well before 1324 the hollowness of that achievement had become apparent.

Vienne in 1312 famously dissolved the Templars (a favourite subject, of course, with conspiracy theorists ) and they did not really make a come-back, but the initiatives towards the Eastern churches bore no real fruit before or after 1362.
Constance summoned by the Emperor in 1414 and by one of the three Popes - John XXIII - in 1415 resolved the Great Schism by electing one recognised Pope in Martin V (barring a few followers of Benedict XIII, Clement VIII etc in the Pyrenees), but its ensuing Conciliarism was to be formally reprobated by Pope Pius II before his death in its anniversary year of 1464. Within fourteen years of the Council of Florence's union with the East in Laetare Coeli,  Constantinople had fallen to the Ottomans, and Orthodoxy's, position was even worse.
Lateran V in 1512-17 had no substantive impact. Seven moths after its close Luther posted up his 95 theses and within a few years Catholic Christendom was riven asunder. By 1562 the Wars of Religion had begun in France, the eldest daughter of the Church...
Trent which met in 1545 had, by 1595, enabled a significant and substantial recovery by the Catholic Church which continued into the next century, but much lost territory - and many souls - remained lost.
Vatican I met in 1869-70 but was halted after its first session by the outbreak of the Franco-Prussian War. It achieved a definition of Papal Infallibility, but its intended aim of engaging with the issues posed by the contemporary world and its ideas had to be deferred. By 1919-20 the world to which Pope Pius IX and his bishops belonged had largely disappeared, much of it blown away by the disaster of Word War I. That new world would have been largely unimaginable to most in 1870, and then mainly as a nightmare.

The opening of the Second Vatican Council in 1962

So as we reflect fifty years on about Vatican II, as indeed many have been doing ever since it closed in 1965, its purpose, achievement and legacy, not to mention the "Spirit of Vatican II" continue to be discussed and indeed fought over. The precedents are uncertain as to the successes of such Councils. The future is, of course, unknowable, so there is much to contend for and over. Maybe the Year of Faith will help all Catholics not only to know their faith better, as the Pope intends, but also to understand what has happened since this day fifty years ago. We must pray so.

Indeed, John, and an interesting view on VII. I had not considered before how the other councils of the Church had been viewed after their conclusion or their effect on Christendom.