Queen Margaret I of Denmark


Today is the 600th anniversary of the death in 1412 of Queen Margaret I of Denmark.
Born in 1353 she inherited the Danish crown, although she did not necessarily use the title Queen of Denmark, and was Queen Consort and then Queen Regent of Norway and Sweden. She was the architect of the Union of Kalmar of 1397 which united all the Scandinavian Kingdoms and their dependencies - that is everything from Finland westwards to Greenland - under the rule of her grreat nephew and adopted son Eric of Pomerania. He was to reign as King Eric VII of Denmark, King Eric XIII of Sweden and King Eric III of Norway. He married Philippa of Lancaster, daughter of King Henry IV of England. Not until after Queen Margaret's death in 1412 did he enjoy unfettered authority, and nor was he as successful as her in his exercise of it.
Despite strians and revolts, including the deposition of King Eric, the union lasted until 1523 with Sweden, and of Denmak and Norway until 1814, when the crown of Norway was linked to that of Sweden, until the dissolution of that union in 1905.

Queen Margaret (or Margrethe) is an outstanding example of successful female rulership, and her life illustrtaes how women could and did exercise authority in the middle ages. There is an online account of her life which can be read here. There is another article about her with substantial bibliographical information and links here  and there is another account here.

Queen Margaret I of Denmark, Norway and Sweden
Tomb effigy of 1423 in Roskilde Cathedral

A remarkable survival from her lifetime is her Golden Gown. Originally preserved in the cathedral at Roskilde it was taken as war booty by King Charles X of Sweden in the Swedo-Danish wars of the seventeenth century and given to the cathedral in Uppsala. There it was rediscovered in the early twentieth century and conserved. It is a unique survival of a late medieval court dress of the highest quality. A modern reconstruction is on display in Stockholm, and can be seen in these photographs: 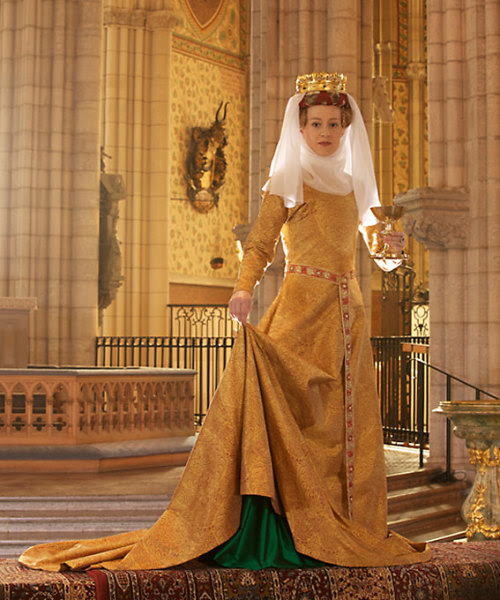 Image:durantextiles.com/tumblt.com
There are several online articles about it and its fabric and about the making of the reconstruction which can be read here, here, here and here.
Posted by Once I Was A Clever Boy at 09:23