Yesterday afternoon, having nothing better to do whilst acting as a volunteer porter at the Oxford Oratory I started reading Walter Brandmüller's Light and Shadows: Church History and Faith, Fact and Legend (Ignatius Press, 2009) . This is a collection of essays and addresses by the former President of the Pontifical Committee for Historical Sciences, who was created a Cardinal in the most recent Consistory.

All of the ones I have so far read are elegant essays touching on such central issues as the papal primacy, and the ability of the Church to renew itself, often against seemingly massive odds. I particularly enjoyed an essay about the date of Our Lord's birth, which argued that a traditional dating is the most likely, and sweeping away the not-infrequently expressed 'historical' doubts. The work of an Eminent historian indeed, and which I would recommend to anyone interested in the interaction of historical scholarship and the life of the Church.

I met the author some years ago when he visited Oxford and delivered a seminar at All Souls. As he specialises in the Conciliar epoch of the early fifteenth century my supervisor introduced us, and the then Mgr Brandmüller expressed interest in my work on Richard Fleming, who attended the Councils of Constance in 1416-18 and Pavia-Siena in 1424.

Later on yesterday I looked at the New Liturgical Movement and found this link to pictures of a Mass celebrated by Cardinal Brandmüller in the Extraordinary Form on Sunday 6 February, for the Franciscans of the Immaculate at Campocavallo di Osimo. The Deacon was Fr Uwe Michael Lang C.O., author of Turning to the Lord, whom I know from his time in Oxford, and from hearing him lecture both here and in London. Here is one of the photographs from the post: 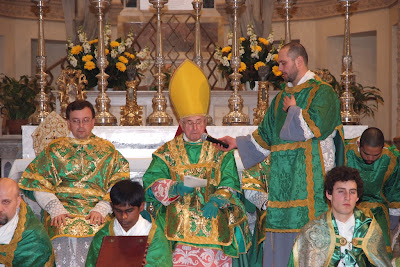