I spent an agreeable morning guiding two Australian visitors around the city centre of Oxford, concentrating mainly on Catholic sites of interest. One other place which particularly interested them was the stretch of city wall which survives in the middle of New College.
This is one of the less well known surviving pieces of medieval Oxford, but also one of the more remarkable. Its survival is due to an agreement made between the founder of the college, William of Wykeham, Bishop of Winchester and the townsmen that his college would maintain the walls in good repair where they bordered its site.
In recent decades the traditional inspection of the walls by the City Council has been revived, and triennielly a delegation of Councillors, in full robes, march off to check that this part of the city defences are still in good order. 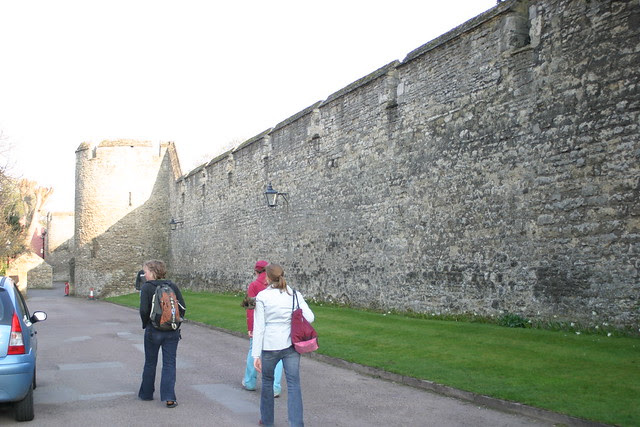 The city wall within the grounds of New College
Image: carolynhack on Flickr
In the north-east section in the grounds of New College and St Edmund Hall Oxford has some of the best preserved walls of any English city, and elsewhere they survive for much of the circuit, which is easy to follow. There is an excellent survey with illustrations here.
Today they are largely hidden from view. When Ralph Agas drew his ariel map of the city in 1578 the walls still stood out clearly marking the city off from its environs - a bit like Avila in Spain still appears today. Over the next century the expansion of the city population meant that housing encroached along the northern and eastern faces of the walls, hiding them from view. The ditch in front gradually silted up, reducing the elevation and impact. In the Civil War the effective defences of the city were the earthen embankments and ditches created by the Royalists so as to include the suburbs, not the city walls.

The town walls are clearly marked. Those around New College are in the bottom left hand corner of the circuit.

The question remains as to why the walls were constructed. The tenth century fortified burh is easily explained in the expansion of the control of the Wessex based monarchy over the southern part of Mercia, but, apart from border towns , after the Norman Conquest did not really need defensive walls. Sieges of towns were unknown in medieval England given the strength of central government and the nature of the conflicts that arose. Apart from Exeter and Norwich in 1549 the only urban centre that really did face the risk was the capital. London did face attack and occupation, or the threat of it, in 1381, 1414, 1450, 1461, 1497 and 1554. It had a circuit of walls but the seat of government at Westminster was not walled.
Walls in London and Oxford, as elsewhere, look to have been an inheritance from the past which towns maintained because they were there, and signified the identity and prestige of the community. In a sense building ambitious town walls and, even more so, gateways - which sometimes were the only features, the town otherwise relying on a ditch and acommon boundary line of houses - was to the fourteenth and fifteenth century urban patriarchate what the grand Town Hall was to nineteenth century civic fathers, or the Conference Centre is today. Town walls helped Oxford and other towns define themselves against outsiders.
Ironically in the case of Oxford there was far more likely to be problems within the city in the form of Town-Gown conflicts. Here tensions between two communities living cheek by jowl could easily spill over mto violence. The last of these riots occurred in the mid-ninetenth century. Most famous of these in Oxford was the 1355 St Scholastica's day riot, the anniversary of which fell this week. The result of that was the University, which could always then rely on the backing of the Crown and government, being given even greater control over the administration of Oxford. As a result until the 1820s each year the Mayor and Corporation had to attend a penitential service in St Mary's on the anniversary. Maybe scrapping that was the beginning of the decline of the University...
Posted by Once I Was A Clever Boy at 13:37