Yesterday I was a server at the wedding of two friends Owen Curry and Emily Shaw.

I have known Owen and Emily for a decade, meeting them at Pusey House, and like me they are converts to Catholicism, being received in 2007 and 2008 respectively. For their wedding they returned to SS Gregory and Augustine in Oxford where Emily was received into the Church.

In his speech at the reception afterwards Owen described the service as a simple, Bible-based one. Well, you could say that, but it has attracted the attention of the bloggers, being a High Mass in the Extraordinary Form.

The deacon at the Mass, Br Lawrence Lew OP, has posted this illustrated account on the New Liturgical Movement, with links to the other pictures taken by that other indefatigible photographer of things liturgical, James Bradley. 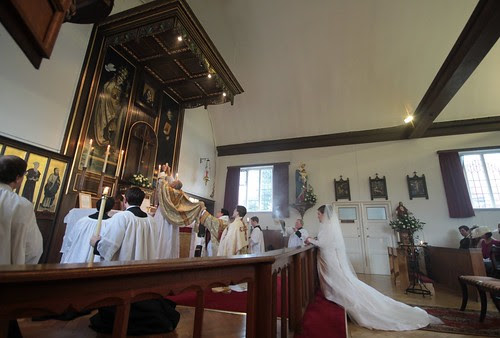 The sanctuary party provided the opportunity for a reunion of former Puseyites who have in recent years crossed the Tiber and all of us very keen on the use of the Extraordinary Form for Mass. So there were three former sacristans of Pusey in the sanctuary, and also two former Anglican clergy amongst the servers. In the photograph above I can be seen wielding the thurible. We had virtually all served together in the past which helped us through the complexities of entrances, exits and positioning ourselves in the right place at the right time in what is a small church. The fact that it all went smoothly also proved the point that it is worth rehearsing as we had for such liturgical occasions.

It was a beautiful and prayerful liturgy and provided, together with Fr Jerome Bertram C.O.'s impressive sermon, a very dignified and sacred beginning to Owen and Emily's married life. Please keep them in your prayers.
Posted by Once I Was A Clever Boy at 14:45