My series of tutorials on sixteenth century women continued today by looking at women in two somewhat different households. The first was that of Thomas More at Chelsea, and in particular his eldest daughter Margaret Roper (1505-1544) and her sister-in-law Anne Cresacre (1511-1577). the other was that of the Dowager Duchess of Norkolk at Horsham St Faith and Lambeth, which produced Katherine Howard (c.1521-1542), Henry VIII's fifth wife.

They are interesting as households in that we have internal evidence of the way they functioned and in the lives of the women formed within them. More was in many ways exceptional in his interests and appreciation of the possibilities of female education. It was a serious, learned,pious household. As a friend once pointed out to me it anticipates the Puritan households of thelater decades of the century and of the next. Indeed another similar one might be the Ferrer household at Little Giddings in the 1630s and 1640s. With its humanist educational ideals it was unusual for its date in England apart from the Court and the circle around Queen Katherine of Aragon and her daughter, Princess Mary.

Portrait of Margaret Roper, from a 1593 copy of a now-lost Hans Holbein portrait of Thomas more and his family.

Margaret Roper is remembered for her fidelity to her father in his last months, and her husband wrote the first English biography of his father-in-law. Anne Cresacre entered the More household in the traditional position of a ward with an estate, and she married John More in 1529. My particular interest in her arises from the fact that her home at Barnburgh near Doncaster in the West Riding of Yorkshire is close to my own home town, and her memorial brass inscription can still be seen in the very fine medieval church there. After the martyrdom of her father-in-law she returned to Barnburgh with her husband and their descendants lived there until the line died out in the nineteenth century.

The Dowager Duchess of Norfolk's household which produced Katherine Howard was, it emerged, lax in maintaining proper oversight of the younger members, with inevitable consequences. Although not illiterate Katherine appears to have been less well educated than many other women of similar position. She appears to have been vivacious and attractive, but otherwise fatally silly, if not stupid. What might be tolerated in provincial society was not when she was the Queen Consort. The result was her death and those of Thomas Culpepper, her apparent lover, and Francis Dereham, to whom she was technically married when she became the King's wife, and whom she had employed in her household when she was Queen. Again I have a local interest in her story - one of the places she was held to have committed adultery with Culpepper during the royal progress to and from York in 1541 was Pontefract castle. 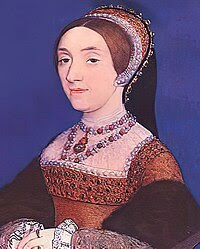 Queen Katherine Howard
Miniature by Hans Holbein the Younger.
The portrait has been believed to be of her since the eighteenth century, although this has never been definitely authenticated. However the jewellery and the resemblance to another minature in the Royal Collection make it virtually certain. No other true portrait of her is known to exist.

Image: Wikipedia from the collection of the Duke of Buccleugh

Moving on from these biographical studies it was possible to look at the part played by such households in educating women for their responsibilities as mistresses of their own houses, as well as the acquisition of courtly skills for those destined, or who saw themselves as so destined, for noble and royal society. It was all education, as well as an entry into the marriage market, with all the hopes and fears of propertied parents for the future of their lineage and lands. The ladies of the More householdreceived, or had the possibility of, an exceptional education and strong Catholic formation - their descendents were to remain recusant for centuries to come. Katherine Howard learned somethings as a girl that were no help at all; her meteoric career and fall bore witness to the risks involved in the world of the household and, above all, the King's court.

I am delighted to have found your very interesting blog, via links at Tea at Trianon.

You draw a very striking contrast between the ladies of the More household and Katherine Howard. It makes me think of what 'might have been' had poor Katherine had a better, more careful upbringing.

I wonder as well what Katherine would have been like under better circumstances. I don't think she was stupid, just ignorant of the world around her.