My course of teaching on women in the sixteenth century continued this morning with a tutorial on Anne Boleyn.

The Wikipedia articles on Anne Boleyn and her brother George, Viscount Rochford are a good and detailed digest of current historical opinion about them, and well worth looking at. 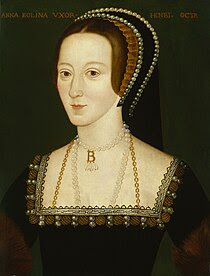 A late Elizabethan portrait of Anne Boleyn, possibly derived from a lost original of 1533–36.
Photo: Wikipedia

The themes I gave my student to consider were those of the extent to which Anne Boleyn can be seen as protagonist and to what extent victim. Apart from the obvious answers the results of such an examination of her extraordinary life yields interesting insights into which category her life fell at different points. Once married to the King her freedom of action paradoxically declined - as Queen Consort her power was circumscribed in action. Like the medieval vision of the wheel of fate she was likely to fall from the apogee. A not dissimilar fate befell the family of Jane Seymour after she had died, even though she left the King with the long sought male-heir.

One thing which struck me was the similarity between Anne Boleyn and Henry VIII's grandmother, Elizabeth Woodville, about whom there is a good introductory article here. Both women came from courtier families, yet were in many ways outsiders, unpopular as individuals and families for their spectacular rise to power and influence with a marriage to the King. Just as Anne Boleyn refused to be Henry VIII's mistress, so, it is claimed, Elizabeth, Lady Grey (as she then was) refused Edward IV's advances without the promise of marriage. Both marriages complicated (to put it mildly) foreign policy. Both families paid a terrible price for the ascent to the throne - Elizabeth lost her father, two brothers and three sons to violent deaths, whilst Anne and her brother lost their own lives. Both Elizabeth's mother and Anne were to be accused of witchcraft. Both their marriages to their regal husbands were to be declared invalid - Elizabeth's by Richard III, Anne's by Henry VIII - and their children consequently illegitimate. 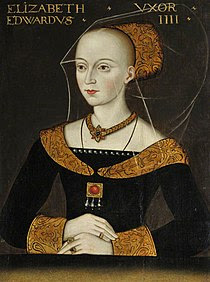 Elizabeth Woodville
Photo: Wikipedia
Perhaps all that these points prove is that the England of the 1530s was far less different from what it had been half a century earlier - but as a late medievalist I suppose I would say that. Nevertheless I think the similarities are instructive about both the life of these two consorts, and about the abilities of women in such a society to achieve social mobility, as well as of the risks involved for them and their families the higher one rose.
Posted by Once I Was A Clever Boy at 15:45

the extent to which Anne Boleyn can be seen as protagonist

I'm not sure protagonist is the alternative most fitting to place alongside victim. Villain, antagonist, seductress, adulterous instigator of Christendom's destruction all come to mind, though. Anne never married anyone, and the pretense that she displayed some type of virtue by refusing---to the extent we're willing to suppose, pretend, or conclude that she did so refuse---Henry's advances until he had expelled Catherine and simulated a sacrament is simply silly. Maybe Ann was manipulated by her relatives for their own vile ends, and perhaps she was the architect of her own lust. Neither alternative, however, makes her the protagonist of any tale.

Titus, what a relief to know that you have cracked this five hundred year old mystery and managed to understand Anne Boleyn's psychology better than any of her academic biographers. Was it via a ouija board that this modern miracle was achieved?

Frankly, this kind of version of Anne Boleyn is the height of intellectual stupidity and even deploying the word "intellectual" as a prefix seems to be endowing it with a dignity it doesn't deserve. Matrimony in the sixteenth century was a good deal more complicated and the papacy's chop-and-change attitude to canonical interpretations of it even more so, depending on who the Vatican was allied to politically at the time. It is quite clear that you have not bothered to read any of the primary material or indeed the vast amount of convincing academic secondary material on her, otherwise you could not possibly have tried to get away with a sentence like "pretense that she displayed some type of virtue". Furthermore, it's difficult to see how Anne was "the adulterous instigator of Christendom's destruction," when, for instance, Katherine of Aragon put her own position as queen above the needs of the universal unity of the Church? As most people would acknowledge there are two sides to most stories and when one is attempting to grapple with the issues of people who lived five hundred years ago, it's best not to clamber onto one's soap box to make sweeping pronouncements on issues of which one is ill-informed. Having studied the Tudor court and the Boleyns in particular for quite some time, I'm pretty much aghast that anyone could pronounce with a such a degree of certainty fews which are so unimaginably stupid and worse, contribute them to a blog which is being written by a serious academic.

On my own blog, I've posted at length on the research into Anne's story. Summarised here (http://garethrussellcidevant.blogspot.com/2010/08/allure-of-anne-boleyn.html) and with a series on her downfall which culminated here (http://garethrussellcidevant.blogspot.com/2010/05/may-19th-1536-execution-of-anne-boleyn.html).

Anyway, the comparisons between Elizabeth Woodville and Anne Boleyn are certainly interesting and one's which have sprung to my mind before. I also couldn't agree more that the late medievalists' current view that England in the 1530s wasn't nearly so different as the England of the 1460s as we once believed is absolutely right. But then, my masters is in the late medieval period and, in particular, the Queen's Household from the time of Elizabeth Woodville to Katherine Parr. So, like you, I'm inclined to agree with that argument anyway.

And you're a Balliol man? I was at Saint Peter's and discovered this blog by chance through a link on "Tea at Trianon." Definitely going to start following!

Interesting post! I'm not real familiar with Elizabeth Woodville, but she seems like a fascinating person. She captured a king's heart, which is no easy task.

First of all, if we really want, we can all take our graduate diplomas off the wall and count the Latin words on each: I'm sure that will be an edifying and useful exercise in credential counting. Until then, perhaps we should all just refrain from considering ourselves above reproach or consideration because we own a sheepskin.

Second, I will readily admit harboring a profound skepticism about the conclusions of recent scholarship in, well, essentially every field, from which I by no means exclude my own. So no, I'm not on the up and up regarding what people are saying these days about Miss Boleyn. That said, it may very well be that she was a "protagonist," if we want to use the term in the manner of some literary critics to describe a central, self-directing figure in a story. I find the use of the term in this morally ambiguous fashion somewhat distasteful, but will concede that it is not meaningless. I'm certain there is a wealth of interesting data that one could examine on the subject.

However, I will continue to maintain that whether Ann directed or was directed in her actions is largely irrelevant in the wider context. Nor is hand-wringing about the supposed complexity of marriage in the sixteenth century (nor, for that matter, academic commentary on the manner in which various popes exercised the potestas clavis) actually enlightening. It was as true in the 16th as in the 5th or 21st century that a man who divorces his wife and attempts to marry another woman commits adultery. It was as true in the 16th as in any other century that a man who separates himself from the Church commits schism and that one who lies under oath commits perjury. The study of history might assist us in understanding why an individual committed a historically relevant sin, but it will not make what is evil good, or what is good evil. Nor should it lead us to think that such is the case. Our sheepskins do not entitle us to disregard the divine law any more than they allow us to go through life free from criticism.

Titus is in no way true that 5th, 16th or 21st century versions of marriage were the same thing. As anyone with even a passing knowledge of the 12th century would tell you. However, I should point out that I'm not "hand wringing" about the state of marriage in the 16th century. I don't particularly care, to be quite honest, it's not really the historian's job to do that. Furthermore, I feel vindicated, since you have effectively admitted that your assessment of Anne Boleyn is unaffected by research on her - namely, reached without regard to, or impact by, facts. Which rather settles this from my point of view.

having purchased from national archives their offer.bargain price of 20 pounds, was shocked when viewing the white queen. with her broad forehead inherited by son and granddaughter. susan Higginbotham mentions Elizabeth scrope. the writer's achievement of arms contains the white and red rose turned into tudor rosesi inherited from john hsrmsr warden of Winchester college snd john of Gloucester. the warden's grandmother was joan scrope. the bend on the arms is scrope whereby scrope won his court case to use it.