Cardinal Burke ordains at the Institute of Christ the King


The New Liturgical Movement has a post with illustrations of Cardinal Burke leading a pilgrimage to the heart of St Francis de Sales and a diaconal Ordination he celebrated for the Institute of Christ the King in January. You can view it here. From the post there are links to other photographs of both occasions.

Following on from my previous post about the new English translation of the Novus Ordo and its opponants it is so positive to look at the renewed tradition that Cardinal Burke and the Institute both represent and practice.

Almost twenty five years ago I recall looking at the famous photograph from the 1920s of an enthroned Cardinal Mercier of Malines (d.1926) in full pontifical vestments and being told by an Anglican religious that I would never see such a thing in my lifetime (nor, by implication, would anyone else ever do so). Yet here in 2011 is Cardinal Burke in a very similar pose: 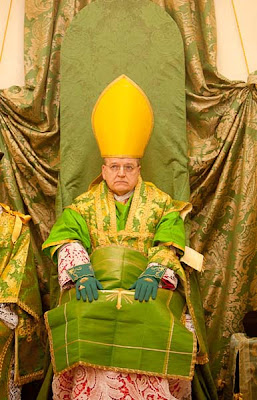 Not only that but the whole liturgy was celebrated with the all traditional vestures for the Cardinal and his attendants, as is discussed in the comments on the post. Thus, for example, he wore the winter cappa magna, with the traditional galero, and wore the tunicle was well as the dalmatic under the chasuble. This is what I mean by liturgical renewal - restoring those things that are gone to decay, and making all things new in Christ.

hello, I just stumbelled upon this site and since the time has changed and today the Vatican is in dire straits I wonder if you still think the same... well of course , you are a traditionalist