The Mad Monarchist has posted a copy of this rather remarkable picture which I thought I would copy and post here. It depicts Emperor Alexander III of Russia, the Empress Marie and their children, the future Emperor Nicholas II, the Grand Duke Michael, both murdered in 1918, andn the Grand Duchesses Xenia and Olga, being blessed by Christ. I know nothing more about its history than seeing it on his blog. 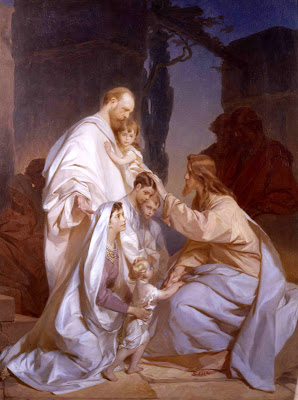 It is, I think, unusual for its date by reason of its unequivocal imagery involving living members of the Romanov dynasty. As religious art produced, I assume, in Russia, it is unusual for not being in the tradition of the Orthodox icon.

Depictions of Deities blessing rulers are amongst the most ancient of art forms and used as expressions of sacral authority from Pharonic Egypt onwards. In the west European tradition they are noteworthy in the Carolingian and Ottonian periods, and prominent in the later middle ages, with, for example, the works of art commissioned for the Emperor Charles IV and the Wilton Diptych of King Richard II. As a model for representing the ruler it lost some favour with the sweeping changes of the sixteenth century, but re-emerged with the Baroque.

This particular painting is a curious blend of such traditional monarchical devotion and the rather pre-Raphaelite, Biblical literal style popular in western European devotional art at that period, and late in its date.