Today is the feast of St Blaise, Bishop of Sebastea in Armenia, who was martyred in c.316. As he was tortured with iron wool combs he became the patron of cloth workers, and is often depicted holding a wool comb. He is also the patron of those with diseases of the throat.
Blaise/Blasius/Vlaho, bishop of Sebastea (Turkey or Armenia), martyr (316?) He lived and died during the time of Diocletian or Licinius. Legend adds that he became bishop when a young man, retreated to a hermitage when persecutions began, and was brought to official attention by hunters who saw him curing sick and wounded wild animals.He had an affinity with animals usually reserved to Irish saints; his feats included convincing a wolf to return a stolen pig to a poor woman. While in prison, he healed a boy who had a fishbone stuck in his throat; this gave rise to his patronage of those who suffer from maladies affecting the throat. The mother of the child later brought Blaise food and candles in prison, so the blessing of St. Blaise includes the application of two candles to the sufferer's throat. Blaise is also invoked prophylactically on his feast day (which in the Northern Hemisphere occurs during a season when upper respiratory infections are common) to ward off coughs and other afflictions of the throat.
February 3rd is now St Blaise's day in Latin-rite churches. He is said to appear in Carolingian martyrologies under February 15th; whether his feast was moved up under the influence of the candles part of the legend in order to bring it close to Candlemas or whether, instead, that aspect of the legend is a later addition reflecting Blaise's repositioning in the Roman calendar is something that would be worth investigating. Greek-rite churches celebrate the hieromartyr Blasios on February 11th.
One of the Fourteen Holy Helpers of the later Middle Ages, he has been venerated extensively in the West since at least the ninth century. Blasius (Vlaho) has also been venerated as patron saint of Dubrovnik (Ragusa) since the 11th century. His relics are widely distributed.
Adapted from Terri Morgan's post on Saints of the Day on the Medieval Religion Discussion Group
As a saint his cult has remained popular in away that many, more famous, saints have not. Thus long after the reformation "Bishop Blaise" continued to be celebrated by guild processions in English cloth making towns and to appear on trade tokens.
The throat blessing is also still popular - something which I received this evening after the 6.00 Mass at the Oxford Oratory. 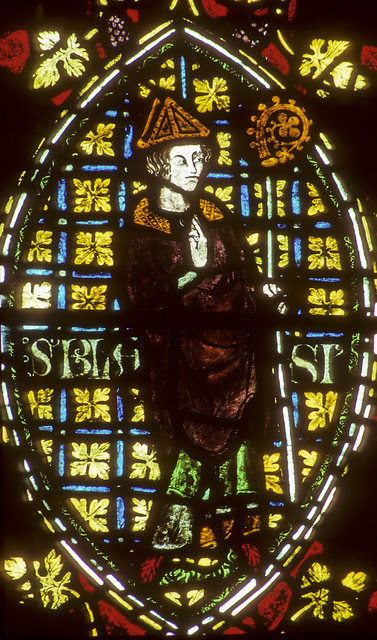 Early fourteenth century glass in Christ Church Cathedral Oxford
Photo: Gordon Plumb on Flickr
Posted by Once I Was A Clever Boy at 20:07