To day is the anniversary of the assassination of King Carlos I and the Prince Royal Luis Felipe in Lisbon in 1908. 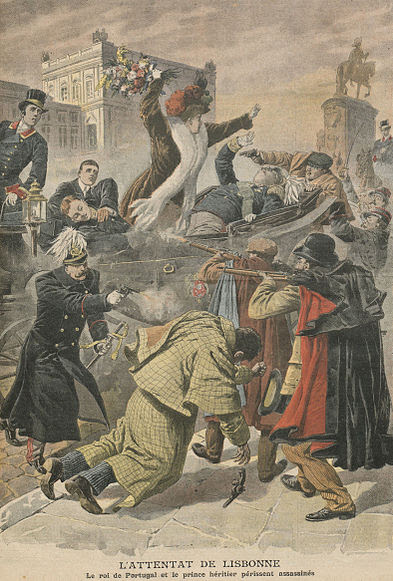 A contemporary artist's impression of the assassination and Queen Amelie using her bouquet to strike at the killers.
.
Photo: Wikimediacommons

The dreadful events of that February day and the background to the attack on the monarchy as an institution are described  here. There are also online biographies of the King and the Prince Royal.

As I have written before the overthrow of the monarchy in Portugal two and a half years later did nothing to resolve the problems of a country facing the challenges of a changing world. By removing the institution which had created the country and represented its independence, and which, of its very nature, should and could command loyalty and be a focus for stability Portugal was fated to years of revolution, instability, authoritarianism, more revolution, and continuing relative decline. The overthrow of the monarchy was followed by attacks on the Church - this was the political background to the visions at Fatima. What happened in Portugal in those years was a foretaste of what was to happen later in many other European countries, and never to their betterment.

Fidelity to the cause of the monarchy remains strong in the country, and today tends to be a focal point, with Requiem Masses being celebrated for the King and Prince. It is perhaps similar in spirit to English commemoration sof King Charles I.

Three years ago to mark the centenary of the murders I arranged a Requiem in the Extraordinary Form for them here in Oxford.

Thanks to one of my registered Followers, Francisco, I discovered the very impressive blog Real Familia Portuguesa which has a great deal about the assassinations and their commemoration, as well as about the Monarchist movement in Portugal and the Braganza family today. It also has an excellent  series of links to other related blogs. It has an automatic English translation, with the attendent curiosities of style, but that is easily adjusted to.