Heraldry in the National Archives

Last Tuesday evening we had an excellent lecture at the meeting of the Oxford University Heraldry Society by Dr Adrian Ailes from the National Archives, who spoke about "Heralds and Heraldry in the National Archives." His main point was that the PRO and related institutions at Kew are a superb, and not well-explored source for heraldic historians.

Amongst the examples he illustrated was the seal of Gilbert de Clare of c.1146, which already diaplayed on the shield the famous arms of Or, three chevrons gules which was used by J.H.Round to show the existence of hereditable arms by that date. Another version of Gilbert's arms in the BL Lansdowne MSS shows five chevrons, but the essential continuity is clear. 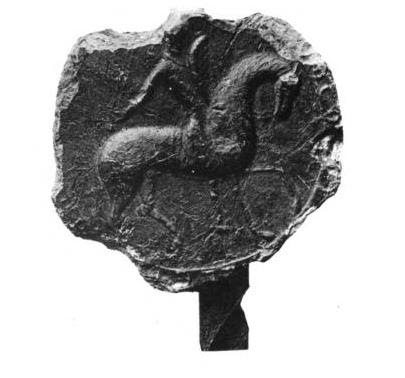 The arms of Clare
Image: Wikipedia

There are the splendid heraldic seals on the 1301 letter to Pope Boniface VIII from the English nobility stating the English claim to Scotland, and from 1303 the seal of Roger de Mordisfen, whose arms were based on those of his lord, Aymer de Valence, which appears to be the earliest instance of the use of arms by someone of his relatively low status, anticipating the emergence of the gentry.

He showed an image of the famous marginalia drawing from 1297 of King Edward I and King Philip IV, each clearly identified by their heraldic crests.
Searching using modern databases of printed records had revealed a hitherto unknown Scots King of Arms in 1360s, a generation before what was thought to be the first such appointment.
He gave an interesting digression on instances of heralds who were on occasion reluctant to serve, and, from Philippe de Commines' Memoirs, of one being pressed into service and given an improvised tabard of two trumpet banners sewn together and dispatched as an envoy.

Herald's oaths of the mid-fifteenth century survive, and require the heralds to know the arms borne within their jurisdiction, which anticipates the Visitations of the sixteenth and seventeenth centuries.

The accounts for the funeral of King Edward IV in 1483 point to the problems caused by an unexpected royal demise - a stamp had to be used to print the lions on tabards and trumpet banners for the ceremonies. The funeral accounts of Queen Elizabeth I in 1603 survive with payments for making the helm and other insignia, and these are illustrated in a British Library MS.

There is the diplomatic correspondence and drawings of the arma adopted by Queen Mary I of Scots as Dauphine and later Queen of France in1558-60 regarding her claim to the English throne after the death of Queen Mary I.

From the records of the Duchy of Lancaster there is the Great Coucher Book of c.1402, with magnificent pages of arms for each of the Honours which constituted the Lancastrian fief.

From later centuries there were approved versions of Royal Arms and badges, from 1800-01 applying to the new United Kingdom, or the revised Welsh badge from 1957, colonial flag designs, and splendid versions of the Royal Arms from institutions like British Rail to mark the Coronation in 1953.

With these and many other examples the interaction of heraldry and history was brought out in an informed and lively way. This was an excellent and beautifully illustrated lecture, continuing the high standard the society is used to - the previous lecture this term had offered fascinating insights into the origin and development of hatchments.

The arms of Clare, as well known from those of the eponymous college at the other university.

Surely Lyon was in existence long before then?

I gather the Lord Lyon does not appear before the early fifteenth century - but I would need to check.