The Prince of Asturias

Today is the 43rd birthday of the Prince of Asturias, heir to the Spanish throne.
In addition to wishing the Infante Don Felipe many happy returns I was interested to see that additional titles have been conferred upon him to reflect the historic roots of the monarchy, and to reflect the Spanish pattern of regional autonomy. Thus in addition to the traditional title of Prince of Asturias, a Castilian title, created in 1388 and modelled on that of the Prince of Wales, he now holds titles reflecting the various lands that comprised the Crown of Aragon and also the title of Prince of Viana as heir to the Kingdom of Navarre. This is analagous to the way in which the Prince of Wales is Duke of Rothesay in Scotland , and has other Scottish titles, and to Queen Victoria' bestowal of the title Earl of Dublin on the future King Edward VII, a title also borne by the future King George V and King Edward VIII as Prince of Wales.
I have copied part of the Wikipedia article to illustrate the different coats of arms, including the distinctive crown, again comparable to those of the Prince of Wales or the Dauphin. The images can be expanded by clicking on the symbol at the lower righthand side.

Titles and arms of the Prince of Asturias

Main article: List of titles and honours of Felipe, Prince of Asturias

Since the proclamation of his father as King in 1975. In 1977, Felipe became Prince of Asturias, the title normally held by the heir to the Spanish throne.

On 21 April 1990, Felipe became the first Bourbon to hold the Aragonese title of Prince of Girona. Formerly no other Bourbon had ever used or even held this title. He is also titled Prince of Viana, Duke of Montblanc, Count of Cervera and Lord of Balaguer.

On 30 January 1986, at the age of 18, Felipe swore allegiance to the Constitution and to the King in the Spanish Parliament, fully accepting his institutional role as successor to the Crown.

By Royal Decree 284/2001 of 16 March, HRH the Prince of Asturias’s Guidon and Standard were created. The decree describes his coat of arms, his Guidon and his standard.

His official title is "His Royal Highness Prince Felipe, Prince of Asturias, Prince of Girona, Prince of Viana, Duke of Montblanc, Count of Cervera and Lord of Balaguer." 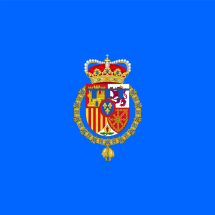 The Standard of the Prince of Asturias
Posted by Once I Was A Clever Boy at 15:53