Last night was the second of this year's Ford Lectures, about which I wrote last week.

In this lecture Prof. Lake looked at the way in which the "secret histories" about Mary Queen of Scots were used to form or shape public opinion and how they came to be used in the trial of the Duke of Norfolk in 1572 and in the discussions in Parliament about his fate and that of the Scottish Queen in that year.

He argued that two of these secret histories were promoted. The first, deriving from Buchanan, depicted Mary as the murderess of her husband, a woman depraved by passion, with Bothwell as her amoral Machiavellian ally, and determined to exercise a tyranny in Scotland, from which her realm had been rescued by the Lords.

The second, deriving from Leslie, met these charges full on, using them to shape the response, but proposing the cynical amoral villain to be the Earl of Moray, determined to seize his legitimate sister's crown, and from whom Scorthetland was delivered by an assassin's bullet.

The former arguments entered into the attack on Norfolk, who was presented as being willing to marry in pursuit of his own ambition the murderess Mary, whom he despised as worth less in income as Queen than he had as Duke. If he was guilty then so was Mary and this could be used to exclude her from the English succession. 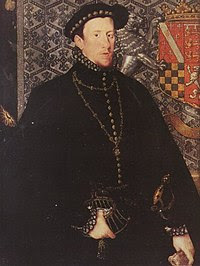 The Fourth Duke of Norfolk in 1563

Photo:Wikipedia
The debates in Parliament saw these arguments advanced by the Cecil government, who had a pamphleteer such as Thomas Norton amongst their supporing MPs and those who sought to argue otherwise presented as being crypo-papist. The destruction or maginalisation of the conservative, Catholic-inclined, traditional lords who favoured a Spanish alliance and who had made significant progress politically in the 1560s was very much part of the ruling group's agenda. Excluding Mary of Scots from the succession had been part of their policy since 1562 and was to be a central part of their programme

The Treatise of Treason appeared shortly after, in 1573, and argued that it was Cecil and Lord Keeper Nicholas Bacon who were the villains of the piece, seen as base-born time servers and politiques and coming to the defence of Queen Mary and the by now beheaded Norfolk. In that year the young Christopher Hatton received a letter from a certain TG enclosing an abstract of the Treatise, which the author wanted Hatton to give to Queen Elizabeth. The assumption was that she did not know what was going on in her name, and would not approve of it.

Prof. Lake's lectures are proving a very interesting series and open up the political infighting and use of propaganda in the period.
Posted by Once I Was A Clever Boy at 11:03