So, it has finally come into being, the Personal Ordinariate of Our Lady of Walsingham under the patronage of Bl. John Henry Newman. I like the way it speaks both of the restoration of ancient devotion to Our Lady under that title and of the achievement of the Oxford Movement, linking those two strands of Catholic and Anglican patrimony.

Not only was it announced yesterday, but here today was tangible evidence in a Mass sheet with that heading for the first celebration of Mass by Fr Andrew Burnham following his ordination by the Archbishop of Westminster yesterday.
He celebrated a Missa Cantata for the Second Sunday in Ordinary Time at the Oxford Oratory, The substantial congregation was drawn from a wide cross section of friends and supporters representing both Catholics and Anglicans. As someone who has known Fr Burnham in his previous persona as Bishop of Ebbsfleet for several years there was something slightly strange initially in hearing his familiar tones as celebrant in the Oratory church. The Provost of the Oxford Oratory, Fr Robert Byrne, acted as Priest Assistant in cope, and there was an impressive array frawn from the local Oratorians, Dominicans, diocesan clergy, Opus Dei and the Knights of Malta sitting in choir, with other clergy and the Sisters of the Work from Littlemore in the congregation. 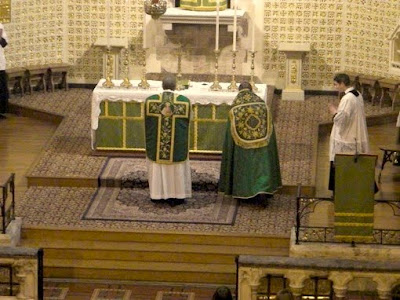 By a happy coincidence the readings of the day were very appropriate, with their theme of drawing together the nations in Christ and of His universal Kingdom, and in His baptism of the outpouring of the Holy Spirit. 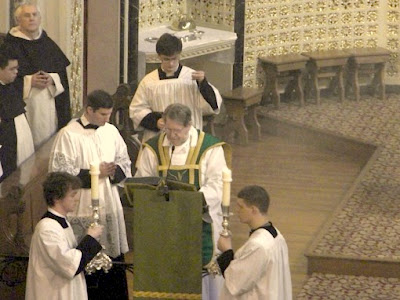 The sermon by Fr Aidan Nichols drew on quotations from Newman which highlighted the concept of an Anglican patrimony that can be shared with the wider Church and the great reference to having a work to do in England. For Fr Burnham that is going in particular to be in connection with the liturgical life of the Ordinariate. 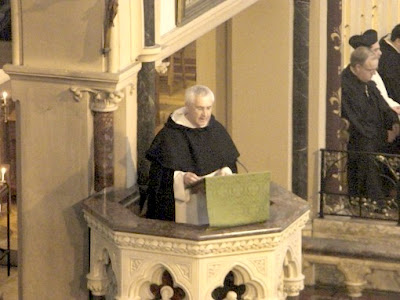 Given Fr Andrew's background as a musician the music was impressive, starting with a spirited congregational rendering of that marvellous hymn Hail to the Lord's Anointed, and for the liturgy Byrd's Mass for Four Voices - a reminder of the cross-ecclesial links of the composer's own life - and the Sanctus and Benedictus sung to overlay the Canon Missae. 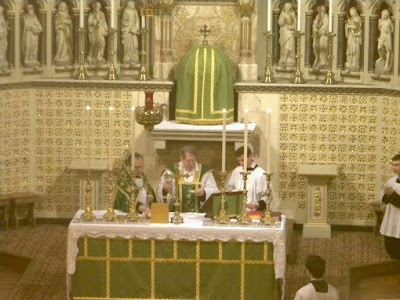 The Communion motet was pertinent:
Andreas Christi famulus, dignus Dei Apostolus, germanus Petri,
et in passione socius Sante Andrea, ora pro nobis.
Andrew, the servant of Christ, worthy Apostle of God, was Peter's brother
and partaker of his passion. Saint Andrew, pray for us.
There was a genuine and moving sense of seeing history being made, both personally for Fr Andrew, and for the wider Church. It is easy to describe something as being historic, and very often it is said of things that are not really very significant , but the events of the last few days are important. One was privileged, in the proper sense of the term, to be present. There was also the real sense that Our Lady of Walsingham and Bl.John Henry were looking down from Heaven on what was happening. We are witnessing, and witnessing to, remarkable events. In that sense at least this is not Ordinary Time.
May Our Lady of Walsingham and Bl.John Henry Newman pray with us, and together with St Andrew, for Fr Burnham, Fr Newton the new Ordinary and Fr Broadhurst, and for the Ordinariate.
Photographs of the Mass from New Liturgical Movement and the Ordinariate Portal.
There are pictures of the Westminster Ordinations yesterday on the New Liturgical Movement  website and they can be seen here.
Posted by Once I Was A Clever Boy at 22:01

I think the fact that this Mass and indeed the ordinations in Westminster Cathedral were so well attended is testament to the excitement about the Ordinariate, and the real feeling amongst the laity and clergy alike that this is a turning point for the Christian Faith present in Our Lady's Dowry.

One can't imagine that SSWSH will stir up such ecstasy.