Whilst looking for images of Lady Margaret Beaufort for my previous post I came across a fine series of pictures on Flickr of the tomb of her parents in Wimborne Minster in Dorset. I have reproduced two of them here. I particularly appreciated them as I recall, many years ago, trying unsuccessfully, to find or make a slide of the effigies for a lecture. The effigy of the Duchess in particular is difficult to photograph as the tomb is immediately above the entrance to the undercroft chapel, and without scaffolding difficult to get close to. The effigy of the Duke is on the choir side and so is more accessible.

Wimborne Minster is a church of great historic and architectural interest, which I have visited on several occasions since I was a small boy, and for which I have great affection. 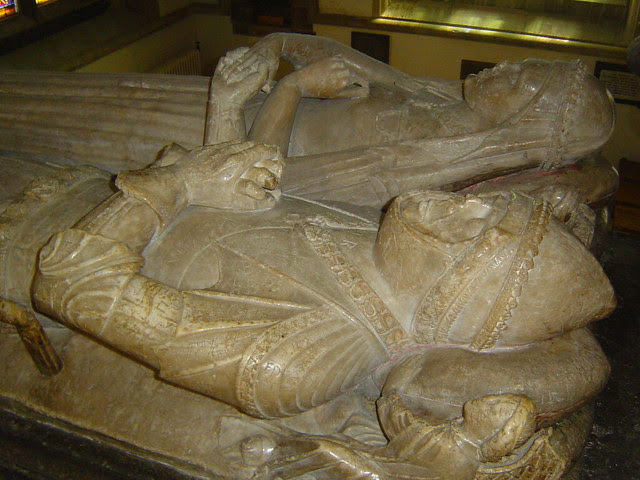 I have edited together the following notes, based upon comments accompanying the photograph on the Flickr site made by Mark Duffy and by the photographer.

John Beaufort, Earl of Somerset, born in 1404, was captured at the battle of Bauge in 1421 and remained in captivity in France until 1439. He was created Duke of Somerset and lieutenant of Aquitaine in 1443, and commanded the abortive English invasion of Normandy the same year. He died the following year at St Margaret's Hospital, Wimborne, near his ducal manor at Kingston Lacy. His duchess, Margaret Beauchamp, died in 1482. Their only child, Lady Margaret Beaufort, was the mother of King Henry VII.

The alabaster effigies depict the couple holding right hands, a device more typical of English effigies dating from a hundred years earlier. The two figures are carved from separate slabs (and different stone types) with no obvious join for the hands. The Duke's figure is shown in armour of the 1440s, while style of the Duchess's robes date from the 1480s. This is the likely date of the commission, either by the Duchess or by their daughter.This in turn raises the question: If both effigies were comissioned around 1480 would the the sculptor would have depicted earlier armour on purpose?

However if the two effigies are of different stone types, could they have been made seperately, Duke John first, immediately after his death, and his widow around 1482?
It is not clear when the Duke's effigy was commissioned. A time interval of more than thirty years after his death is a long time, even by fifteenth century standards. Looked at on its own, the male figure could be contemporary with the time of the Duke's death. But both hands couldn't be changed, and it was always intended to hold the image of someone who died later; in this case almost 40 years later. Duffy suggests that it is possible that the male effigy was carved 'in retrospect' using an old suit of armour, old effigy designs. To this the photographer responds that being carved in retrospect was very rare during the fifteenth century, and cannot cite any dated example. 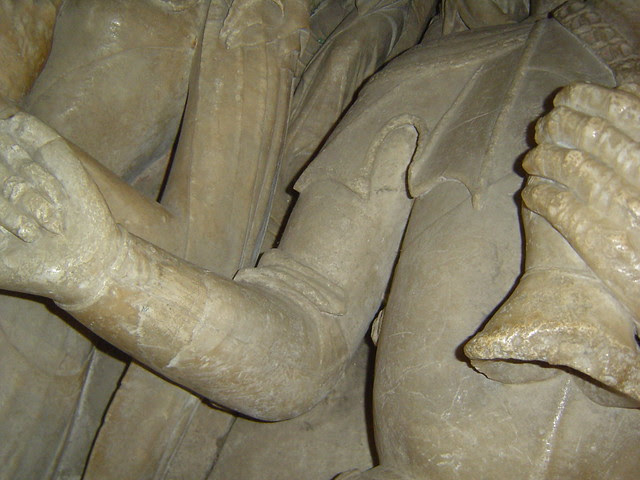 The clasped hands of the Duke and Duchess.
The join between the two effigy slabs can be seen.

To these comments I would make the suggestion that the Duke's effigy was carved soon after his death and that the plan was to install an effigy of Duchess Margaret when she died, as happened.

At Framlingham in Suffolk the second and third wives of the fourth Duke of Norfolk lie with a gap between them - he, being beheaded in 1572, never got to join them, and the tomb is a rare example of one that has never been completed. Similarly, in a later age, when the effigy of Prince Albert was carved and installed in the Mausoleum at Frogmore after 1861 one was prepared for Queen Victoria, but not installed until after her death in 1901. When that occurred the effigy had been mislaid at Windsor and was found after a search walled up in the castle. So delay in installation ( or even loss of an effigy) is not inconceivable.

Carving an effigy in the dress of a generation earlier would, I think, be very unusual, although in the fourteenth century sculptors were, apparently, often a generation behind in what they carved - thus actual armour was more advanced than that depicted on effigies. This emerged at a conference I attended in 1993 on Yorkshire figures.

The tomb would have required several stages to assemble. The base is Purbeck marble, so local to the area, but the effigies are of alabaster which would presumablymean they originated in either the Derbyshire-Nottinghamshire area, or have been produced in London and transported to Wimborne.

The choice of the motif of the clasped right hands, chosen, it is clear when the Duke died, or at least his effigy commissioned, may only be a convention, but is, as is pointed out above, one associated with an earlier period - such as the Arundel tomb in Chichester Cathedral from the 1370s. Perhaps we should give the Duke and Duchess the benefit of the doubt and assume there was genuine affection which they wished to embody in stone. 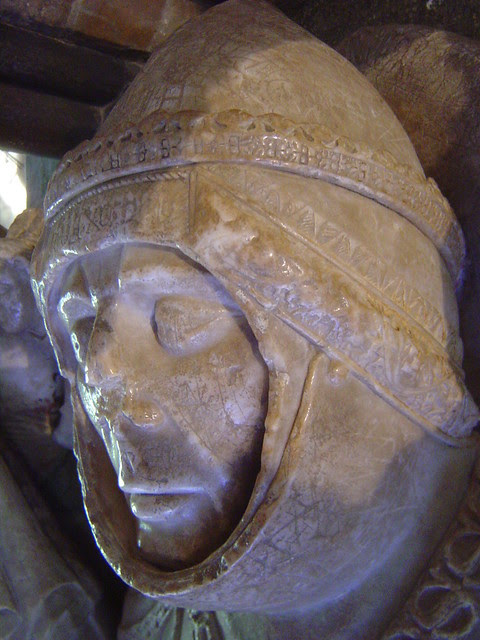 The head of the Duke. His Lancastrian livery collar of SS can be seen.

I wonder what a reconstruction of the nose would look like?

It is the Plantagenet nose, after all.

As a Plantagenet direct descendant, I am very happy my nose does NOT look like my ancestors. However, it would be nice to know what they would all look like if all their features were intact on their tombs.

He died the following year at St Margaret's Hospital, Wimborne, near his ducal manor at Kingston Lacy. Really? His death in 1444 may have been suicide.. http://en.wikipedia.org/wiki/John_Beaufort,_1st_Duke_of_Somerset