The Queen of Denmark 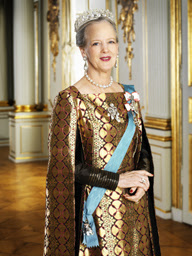 Her Majesty The Queen of Denmark

Credits: Steen Evald, from the Danish Monarchy website
Today is the 39th anniversary of the accession to the Danish throne of Queen Margrethe II in 1972. It seems appropriate to express good wishes on this occasion as Her Majesty enters the fortieth year of her reign, and also to congratulate the Crown Prince and Crown Princess on the birth of twins last Saturday.

In addition to being an exemplary monarch the Queen is both an archaeologist and an artist who is widely esteemed by her people. Her reign has seen the continuation of the stability the monarchy has brought to Denmark and it associated realms.