The Adoration of the Magi

Whilst looking for images of the Epiphany yesterday I came across Stefan Lochner's depiction of the Adoration of the Magi, dated to c.1440-45. It is the central panel of his triptych of the Virgin and Child with the saints of Cologne, which is in the Lady Chapel of Cologne Cathedral - which houses the relics of the Magi. As I had used his Madonna of the Rose Bower on my Christmas Day post I thought I would reproduce his Epiphany picture, partly becuase I like his paintings and particularly as in it he re-uses the same image of Our Lady: 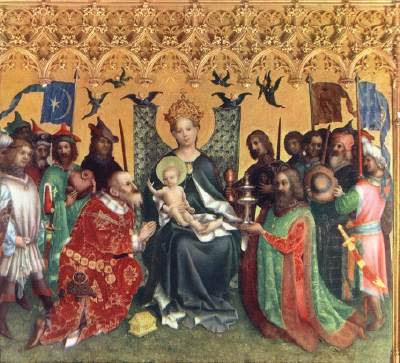 The following are notes on Stefan Lochner from the Web Gallery of Art site:

This German late Gothic painter, considered to be the greatest representative of the school of Cologne. He is known primarily for his highly mystical religious paintings.

Little is known of his early life, but he is thought to have studied in the Netherlands, possibly under Robert Campin (tentatively identified with the Master of Flémalle), whose influence is evident in the treatment of the drapery and the careful rendering of detail in what may be Lochner's earliest extant painting, St Jerome in His Cell (heirs of Edith von Schröder Collection).

Lochner settled in Cologne about 1430. The earliest work he did there was an altarpiece for the church of St Laurenz (centrepiece with the Last Judgment now in Wallraf-Richartz Museum, Cologne; the wings are dispersed). The abundance of minute observation reflects his continued interest in Netherlandish art. But in the central panel he bound the various themes into a unified composition through the use of a dominating rhythmic design.

In the later 1430s Lochner must have been in the Netherlands again, where he encountered the art of Van Eyck. The first work to reflect this influence is the Madonna with the Violet (c. 1443; Erzbischöfliches Diözesan-Museum, Cologne). Van Eyck's influence is most noticeable in Lochner's chief work, the great town hall altarpiece much admired by Dürer. In this Altar of the Patron Saints, now in Cologne cathedral, Lochner adds to the idealism of the older painters of the Cologne school with a wealth of naturalistic observation in the figures, while the sculpture-like draperies lend them a monumental dignity. In 1447 he became a member of the town council, and from the same year dates the splendid Presentation in the Temple (Hessisches Landesmuseum, Darmstadt), which was originally in St Katharinen. The exquisite Madonna of the Rose Bower (Wallraf-Richartz Museum, Cologne) was painted soon afterward.

Lochner became one of Cologne's greatest painters, combining naturalism with a masterful sense of colour and design into a festal solemnity of representation. His work forms perhaps the most successful visual interpretation of late medieval German mysticism before Grünewald. Book illumination was also done in his workshop.