From Let Nothing You Dismay, which I recently discovered, I learned that before Christmas the specimen of the Glastonbury Thorn which grew on the site of the original Holy Thorn on Wearyall Hill on the edge of the town was hacked down just before Christmas. Legend has it that St Joseph of Aramathea's staff  blossomed when he stood on Wearyall.You can read the post, which has a link to a newspaper article about the incident and the history of the tree here. The tree was a prominent landmark on the slopes of the hill, and the present specimen dated from 1952, although its wind bent profile suggested something more venerable. 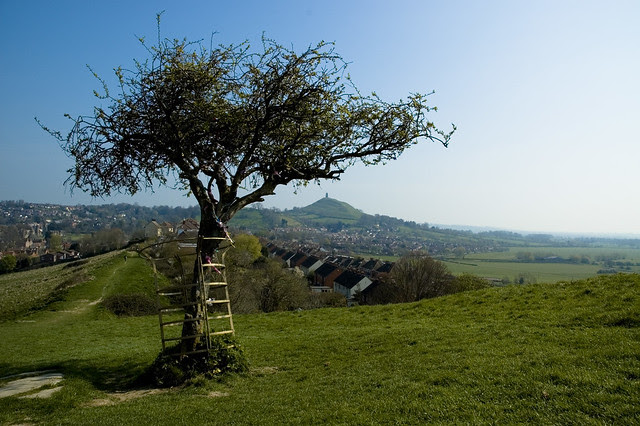 The Holy Thorn on Wearyall Hill, with Glastonbury Tor in the background
Photo by jingjok on Flickr
Such vandalism is always to be deplored. In this case the tree can be replaced by another specimen of the thorn. There are examples in the churchyard of St John the Baptist's Church and there used to be one in the abbey grounds. I recall seeing small specimens on sale in Glastonbury.
I spent Christmas in Glastonbury in 1996 and did see the specimen of the Holy Thorn in St John's churchyard blooming at that time of year.
Whether the attack is anti-Christian is unclear. From the reports it was premediated, not drunken revellers going home. The thorn's location it is such that you would clearly go out of your way to be passing it with a woodman's saw. So it is a disturbing incident. Being a living tree it would surely not attract the ire of modern eco-friendly green pagans in Glastonbury. Is it a return to the actions of the puritan who chopped down the original in the Civil War? Perhaps - but we may never know.
I fear its replacement may be surrounded by security measures that will detract from the solitary, strange dignity of the tree I recall on visits to Glastonbury. However I would comment on the fact that from the pictures in the report the thorn was surrounded by votive offerings of strips of cloth and ribbons, something that was not there when I visited it in the late 1980s. That was the sort of thing one associated with the tree at the Chalice Well in the town. Now I think I know there are Christian precedents around holy wells for such votives, but in Glastonbury I associate them with fringe Christianity - invented "Celtic" spirituality. I think it suspect. The fact that this had spread to the Holy Thorn is interesting, or may indeed be worrying. Has that led some latter-day puritan to assault the tree itself as being the focus of idolatry?
We must hope that the replacement lives to a riper age, and that it continues to remind the visitor of the legends of Glastonbury's Christian origins.
Posted by Once I Was A Clever Boy at 16:29

I think the votive ribbons are more "beyond the fringe" of Christianity. I used to live in the shadow of the Tor and am saddened at this mindless act.
Glastonbury has lost something of its Catholic heritage in the avalanche of new age spiritual cults that proliferate in the town. However, it boasts a wonderful priest who celebrates the EF Mass!