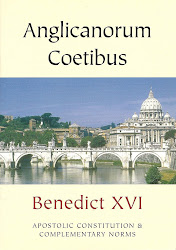 Today the three former Anglican bishops of Ebbsfleet, Richborough and Fulham will receive the diaconate at the chapel of Allen Hall, preparatory to their priestly ordination on Saturday. They, and those who will follow them, are in very much in my prayers. The decree establishing the Ordinariate in England and Wales is expected imminently. In other words, the Ordinariate has arrived.

For up to date information look at the website of the Friends of the Ordinariate and the new Ordinariate Portal, as well as the more personal reflection on Ancient Richborough. Fr Blake in Brighton has a typically entertaining and positive post here about these new developments.

I have enormous human sympathy for those Anglican clergy who feel that for family and practical reasons they cannot enter the Ordinariate at present. One example is a friend of mine who wrote just before Christmas that he remained an Anglican trying to practise and promote the Catholic faith within a Church of England that he described as "crazy." He said he would love to join the Ordinariate, and that his heart is with the Pope, but very real questions about housing and finance, with a wife and two teenage children to support, make it impracticable. I commend him and his ilk to the prayers of all who wish the Ordinariate and their genuine, if separated, brethren well.

However I have rather less sympathy for those who have talked long and hard about the Third Province or now of the Ordinariate, yet who now seem reluctant to move into it when it is being established, and who would be in a position so to do. Of course there would be adjustments, sometimes painful, to be made, but skills of all sorts are transferable. The Ordinariate appears to offer all, if not more, that has been sought for over the years. The Papal initiative exceeds whatever might have been imagined, and is indeed from Peter's successor himself.

Yet now some seem to be talking in terms of "Let's see what happens" or "In a couple of years" or, as a layman put it, "Well we've four years to decide".
Frankly, if I was on the poop deck of the Titanic I would not wait to see if a better lifeboat will come along later than the only one in sight.
Some of these clergy are not, I suspect, constrained by family or finances, yet run the real risk of leaving it, not too late, but so late that their position when they do decide to join is compromised - "What took you so long?" will be the reaction of not a few.
I rather fear that for some the allurements of Establishment remain - somewhat ironically given the tendency of the General Synod and its dominant group to question that as well as everything else (except their own opinions). Some Anglican clergy appear to run the risk of falling into the tempting trap it offers. I am reminded of Bl. John Henry Newman's verse from one of his hymns to St Philip Neri which speaks of

"...when the world allures us
Cries her false wares and opes her magic coffers"
and how St Philip

"Points to a better city, and secures us
With richer offers."
For St Philip read the Pope and the Ordinariate.

I dare say Clever Boy has one of Oxford's better-known centres of Anglo-Catholicism in mind when he writes his remarks. There may be other factors at play, though; the rolling up of trouser legs is more easily executed outside of Rome's maternal embrace.