Order of the Black Eagle of Prussia


Regular readers will know that I have an interest in Orders of Chivalry and today is an opportunity to write about one of them - the Order of the Black Eagle of Prussia. Established on January 17th 1701 by King Frederick I, the day before his coronation at Königsberg as the first King in Prussia (the title was changed to King of Prussia by his gransdson in 1772), and it is the premier Order of the Prussian monarchy. As such it was the equivalent of the Orders of the Garter or the Thistle, and like other Orders established before the late eighteenth century comprised only one class. 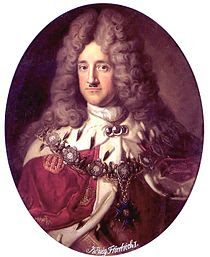 There is a good, illustrated, article about the Order here, with links to biographies of recipients. The article does not mention the fact that the orange colour of the riband was a tribute by the King to his mother Louise Henriette of Orange-Nassau. The star of the Order was used on the headgear of Prussian regiments. The Black Eagle itself is derived from the arms of the kingdom. 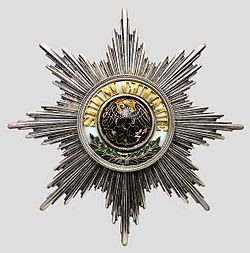 Order of the Black Eagle
Breast star with the motto Suum Cuique ("To each according to his merits") around the central medallion.

I have not so far read Karin Friedrich and Sara Smart (eds.) The Cultivation of Monarchy and the Rise of Berlin: Brandenburg-Prussia 1700 ( Ashgate, 2010) which is a study of the establishment of the new Prussian kingdom by Frederick I. It includes an article on the statutes of the Order. 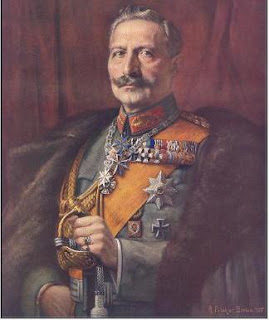 Wilhelm II, German Emperor and King of Prussia
The riband and star of the Order can be clearly seen

Photo: Mad Monarchist
Posted by Once I Was A Clever Boy at 10:34

Labels: King Frederick I, Kingdom of Prussia, Order of the Black Eagle